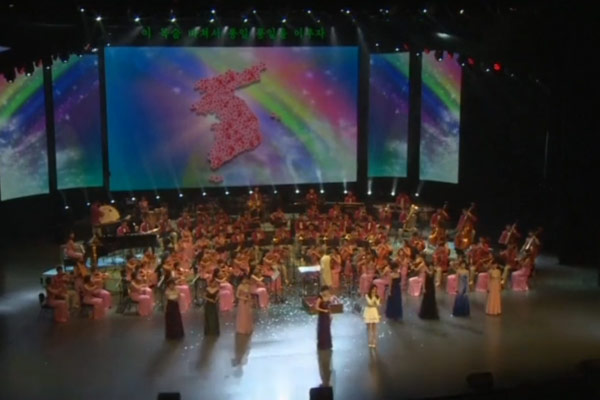 South Korean pop music, known as K-pop, is enjoying growing popularity around the world. The iconic boy group BTS has been dubbed as the “21st century Beatles,” and K-pop was cited as the most favored Korean product among European people this year. While South Korean pop music has taken the entire world by storm, how has North Korean music evolved? Today, we’ll learn about the characteristics and history of North Korean music from Professor Jeon Young-seon from the Institute for the Humanities and Unification at Konkuk University.

Music in North Korea strictly adheres to the principles of its own political ideology called juche or self-reliance. North Korea does not admit the universality of music, which is defined by the North as a kind of sophistry aimed at the cultural penetration of capitalistic art. Rather, North Korea argues that its music boasts the nation’s unique style and characteristics.

The content of North Korean music mostly deals with commitment to the party, social classes and people, with themes focused on relationships between the people and the supreme leader, and also people who live well in the socialist system.

In North Korea, the so-called “juche music” underlines the country’s own characteristics and represents songs featuring the theme of revolution. In other words, the North’s music is a combination of art and ideology and serves as the easiest and most effective means of controlling people’s thoughts. Formerly, lyrics were all about loyalty to the party, policies advocated by the authorities and a cult of personality for the top leader. But the 1980s marked a watershed moment in North Korean music.

In the 1980s, electronic music became all the rage throughout the world. North Korea also couldn’t help but accept its popularity and charms. But it couldn’t ignore its own music, either. So the North embraced electronic music in its own way and formed the Pochonbo(보천보) Electronic Ensemble, which gained immense popularity upon its creation. Previously, North Korean music typically dealt with serious topics like revolution. The new ensemble, on the other hand, sang emotional songs about everyday life, including the love between a man and a woman.

The Pochonbo(보천보) Electronic Ensemble was created by former leader Kim Jong-il in the 1980s. It took the form of electronic music, while still maintaining the political elements of North Korean music.

The new band sang socialist odes in praise of the leader and the party, such as “Without You, Without the Nation” and “If Our Party Wishes.” It also played songs describing daily life and personal feelings including “Whistle” and “Nice to Meet You” and established them as a new genre of music.

Then-leader Kim Jong-il, who was greatly interested in culture and art, sought to strengthen ideological education through songs that were clearly different from previous music. North Korean citizens are said to have relieved their fatigue from a long day’s work by singing along with the band on TV.

The new genre of music permeated deeply into the lives of the North Korean people and also made them believe that musical talent could lead to success in life.

It is quite difficult to move up in the hierarchal North Korean society. But gifted musicians, if they are fortunate enough to be selected, can move up the social ladder and achieve success. One such example is singer Jeon Hye-young(전혜영), a member of the Pochonbo(보천보) Electronic Ensemble. She came from a remote rural area but managed to advance to the central stage and even became a music instructor, all thanks to her outstanding singing skills. In other words, musicians are given the opportunity to elevate their statuses. Current leader Kim Jong-un’s wife Ri Sol-ju(리설주) rose all the way to the position of first lady with her artistic talent. Pop singer Hyon Song-wol(현송월), a former member of the Pochonbo(보천보) Electronic Ensemble, became the leader of the Moranbong(모란봉) Band. In this way, art can elevate one’s status in the strict hierarchy of North Korea.

North Korea’s childhood music education dates back to as early as 1959, when the Supreme People’s Assembly adopted a specialized system to train artists. The North’s original leader Kim Il-sung used gifted students in art as propaganda tools to strengthen his one-man rule.

Amid the ever-growing interest in musically talented students in the North, a private education market for music appeared in the 2000s since musicians and artists could secure relatively stable jobs as instructors at music and dance colleges in cities and provinces. As Professor Jeon explained, first lady Ri Sol-ju and trusted politician Hyon Song-wol, who represent successful North Korean women, were initially musicians.

The Moranbong(모란봉) Band drew keen attention with its unconventional performance in 2012. Former leader Kim Jong-il, the father of current leader Kim Jong-un, died on December 17th, 2011. Three days later, the North’s official newspaper Rodong Sinmun printed an obituary of his death, and it was widely expected that the mourning period would last for a while.

But the following year, after Kim Jong-un came into power, he created the Moranbong(모란봉) Band. In July of 2012, the band presented a brilliant performance featuring more than ten songs from popular Disney movies as well as the theme song of the Hollywood film “Rocky.” The very unusual event showed the new leader’s political strategy of using music and therefore attracted special attention.

It was also amazing to see the concerts of North Korea’s Samjiyon Orchestra in South Korea ahead of the opening ceremony of the 2018 PyeongChang Winter Olympics. Accompanied by the refined orchestral music, North Korean singers sang South Korean pop songs.

Obviously, North Korean music is changing, but it still delivers the message of the Kim Jong-un regime.

North Korean music has changed a lot. Performances have become more spectacular and closer to world music, shedding many traditional elements. A North Korea art troupe presented tap dance during its show in China this year. It showed a stark contrast to previous North Korean music that emphasized its own nationalistic traits.

More focus has been placed on globalization and innovation under Kim Jong-un’s rule, and art is the most effective vehicle to send that message to the people. Through music performances, North Korean people now realize that things are not what they used to be. I think that’s what the Kim Jong-un regime wants.

Culture cannot be assessed based on political interpretations alone. But apparently, North Korean music is changing in a way to convey the message of reform and openness. We hope the significant change found in the North’s music will lead to substantive change in the country.

(Next week, we’ll learn about North Korean food enjoyed during the traditional holiday of Chuseok.)