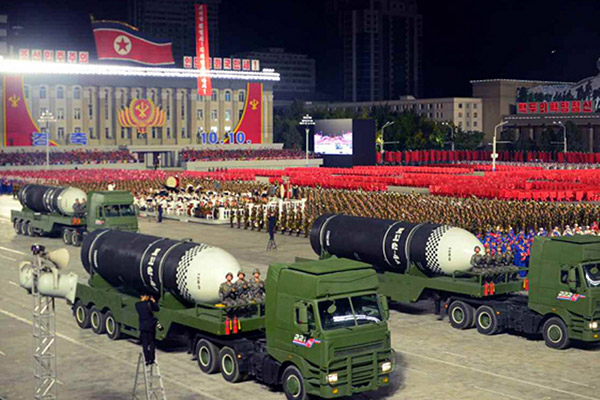 North Korea staged a military parade on October 10 to celebrate the 75th founding anniversary of the Workers’ Party. The event took place in Pyongyang’s Kim Il-sung Square at midnight. North Korea typically held military parades at 9 or 10 a.m. in the past. Sometimes, they took place in the afternoon due to weather conditions. But it was the first time that a parade was held in the dead of night.

Analysts speculate that North Korea wanted to make it difficult to detect its new weapons in the dark and also refrained from upsetting U.S. President Donald Trump, especially ahead of the U.S. presidential election. Here’s Dr. Oh Gyeong-seob from the Korea Institute for National Unification with more.

The nighttime parade had political purposes. First, it came after leader Kim Jong-un’s order to make the event special. It was held in the form of a festival, featuring a variety of things to watch, including a fireworks display. Second, North Korea may have considered its relations with the U.S. It carried out the event unexpectedly at midnight and broadcast it 19 hours later, at 7 p.m.

What drew a lot of attention during the event was leader Kim Jong-un’s emotional speech. While expressing his gratitude to his people repeatedly, he removed his glasses and wiped away tears. It was the first time for any North Korean leader to tear up during a public event. During his speech, Kim mentioned the difficulties faced by the country and said that he was ashamed to face the people, frankly admitting his policy failure. Apparently, he did not promote a perfect image as a leader—something that was pursued by his predecessors.

During his address, Kim thanked troops for their response to COVID-19 and natural disasters and also expressed gratitude to citizens for enduring many difficulties. While showing off the stronger military capabilities of his country, he promised his people to develop the economy and improve their livelihoods. While speaking, he became quite emotional.

Former North Korean leaders never apologized to people as they had an image of a perfect and faultless leader. Still, they were able to control people and elicit support from them. Under the current Kim Jong-un regime, however, international sanctions have crippled the local economy.

The situation has deteriorated even further this year, due to COVID-19 and natural disasters, forcing the top leader to apologize to the public. Kim’s tearful speech shows that he chose to appeal to the people on the emotional level. He will likely try to maintain this type of leadership.

Meanwhile, Kim made a conciliatory gesture toward South Korea during his speech. He delivered a warm wish to his fellow people in the South and also expressed his hope that the North and the South would hold each other’s hand again after overcoming the COVID-19 crisis quickly. It is rather unusual that the leader sent a message to South Korea during his speech aimed at the domestic audience. Expressed in the leader’s own voice, the message indicates his determination to manage inter-Korean relations properly down the road.

North Korea has taken a series of offensive actions against South Korea this year, as seen in its destruction of the inter-Korean joint liaison office and its deadly shooting of a South Korean fisheries official. In this situation, Kim may have felt the need to leave open the possibility of improving cross-border relations. Regarding the shooting death of a South Korean official, in particular, he probably wants to avoid responsibility.

With uncertainties growing over the U.S. presidential election, he may have thought that it would be necessary to use South Korea in the process of managing North Korea-U.S. relations. If a COVID-19 vaccine is developed, North Korea needs to receive aid from the South in order to secure it. Whatever the reasons, Pyongyang’s conciliatory message will be helpful for restoring inter-Korean relations.

In his speech, Kim said that North Korea has modernized and developed its military remarkably, compared to five years ago.

The most attention-grabbing part was a new type of ICBM, which was carried by an 11-axle, 22-wheeled transporter erector launcher. Analysts believe that the enlarged version is aimed at carrying two to three warheads so it can hit multiple targets in the U.S. at once. Another weapon on display was a new SLBM called Pukkuksong 4. Its length was reduced to be mounted on a new submarine.

North Korea also showcased a collection of other new weapons, such as a super-large multiple rocket launcher, which has a diameter of 600 millimeters and a maximum range of 400 kilometers. They also showed a large-caliber multiple launch guided rocket system and a short-range ballistic missile known as KN-23. From those weapons, we can see North Korea continues to develop precision weapons and enhance its nuclear capabilities.

Regarding the new weapons, Kim Jong-un said that the country’s war deterrent would never be abused or used as a means for a preemptive strike. By unveiling those weapons, however, North Korea reaffirmed its determination to push for “self-reliance” and “frontal breakthrough” to tackle sanctions by the U.S. The weapons show that tension still lingers on the Korean Peninsula.

Now, North Korea is expected to make an all-out effort to improve the economy until the Workers’ Party’s eighth congress scheduled for next January. With the leader admitting economic failure during the recent military parade, it is urgent for North Korea to show some achievements at the party event next year. The festival is over, and arduous labor awaits North Korean people.

At a politburo meeting early this month, Kim Jong-un decided to stage an 80-day “speed battle” in a bid to revive the economy and accomplish economic goals before the planned party congress next year. During the 80-day period, North Korean residents will be mobilized to various construction and economic sites to provide labor. Local people will have a very hard time, but the laborious campaign is likely to fall short of North Korea’s initial expectations to achieve economic growth and improve public livelihoods.

North Korea will conduct the 80-day campaign nationwide to find an economic breakthrough, but it will be challenging to produce any visible result until next January. If North Korea-U.S. relations remain deadlocked and sanctions and pressure against the North continue even after the inauguration of a new U.S. administration, North Korea will find it difficult to fulfill its goal of rebuilding the economy. We’ll have to wait and see what strategy North Korea will adopt until its party congress in January next year.