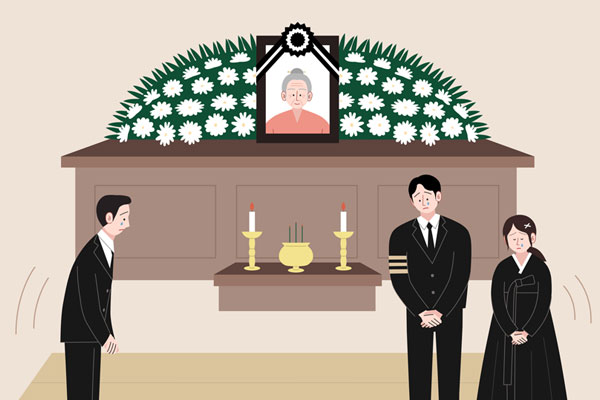 The COVID-19 pandemic has made it difficult to hold wedding ceremonies and funerals, where many people gather. It’s sad that people can’t even pay their last respects to their loved ones, due to restrictions limiting the size of funerals.

We can’t help but wonder how people in North Korea hold funerals. It is said that funerals in North Korea are very different from those in the South. Let’s hear from Kang Mi-jin, a North Korean defector and director of an agency called North Korea Investment.

I attended funerals both in North and South Korea. In the South, hospitals mostly provide venues for funerals. So at first, I thought South Korean people all died at hospitals. In the North, on the other hand, most funerals are held at home. Even if people die at hospitals, their bodies are transported home for funerals. For children of the deceased, it is considered to be their filial duty. At home, the bereaved family displays the portrait of the deceased and burns incense as well. Family members make the coffin themselves. Sometimes, their company provides a coffin. In North Korea, it’s rare to see people wail loudly at a funeral.

Each visitor fills the glass with liquor for the deceased. Liquor is the essential part in North Korea’s funeral culture. This is one of the differences between South and North Korea when it comes to funerals. In the South, the sangju, or the funeral host, and exchange bows with visitors in many cases. But this practice is not found in North Korea.

When a person dies in North Korea, the sangju or chief mourner in charge of the funeral ceremony first notifies his or her company of the death and informs neighbors of the news through a neighborhood watch unit called inminban.

The Sangju then gets a death certificate issued from a nearby hospital or clinic before reporting the death at the community office.

In South Korea, it is common for private funeral service providers to handle all the funeral procedures. The undertaker washes and shrouds the body, while the funeral agency prepares for food and liquor for visitors. So, the chief mourner’s main job is to receive visitors. In the North, in contrast, sangju and neighbors do all the funeral-related work.

Only six or seven years ago, there was no specific job of an “undertaker” in North Korea. When a person dies, older people in the neighborhood, who happen to have experience taking care of the deceased, serve as undertakers. Sometimes, sangju do this job. When a person is seriously ill and his or her days are numbered, family members sometimes prepare a shroud in advance. In South Korea, the burial garment is pretty expensive. But in the North, the body is dressed in clean cotton underwear. It is the sangju’s colleagues at work who place the body in a coffin. The bier is carried out for burial in the morning of the third day after death. In South Korea, a hearse brings the coffin to the cemetery. But North Korean people in big cities like Pyongyang usually use a bus or a cargo truck, while those in local regions use a truck. In general, sangju takes care of all these funeral procedures, and his or her colleagues or neighbors provide help in the process.

Until a few years ago, neighbors and colleagues helped the bereaved families with funerals in North Korea, as Ms. Kang just explained. But funerals are said to have adopted some commercial elements lately. Money is necessary for all funeral procedures, including finding a resting place for the deceased.

Until the early 2000s, North Korean authorities provided a little subsidy, food and liquor to bereaved families in some cases. But some capitalistic elements have been found in the funeral culture in recent years.

Digging a grave for a burial, for example, costs 150 yuan, which is about 180 US dollars, and a funeral car requires 120 to 200 yuan, depending on the distance.

Including the meals the sangju treats neighbors who helped the sangju in the funeral process, the entire cost is around 1,500 yuan. Still, funerals are mostly held at home, and I think it will take some time until funerals are completely commercialized in North Korea.

North Koreans usually carry out funerals, including state ones, for three days. There were exceptions, of course. A five-day funeral was held for some high officials including O Jin-u, a long-time army leader who died in February 1995. The funeral for former leader Kim Il-sung lasted for 12 days. But in general, people choose a three-day funeral. Sometimes, a two-day or even one-day funeral takes place for various reasons.

If a person dies one day before important national holidays such as the birthdays of former leaders, the funeral generally ends before the holidays not to spoil the mood on the merry occasions. In that case, a one-day funeral is held. The same adjustment of the funeral day is also made when someone dies on the last day of the year, as North Koreans believe that death should not last into the New Year. For those who died outside the country, the day when their bodies return home is the funeral day.

According to the 2019 data of the Ministry of Health and Welfare, nearly 90 percent of South Koreans who died were cremated, indicating that cremation has become common. But in North Korea, local people still prefer burial to cremation. Nearby mountains are favored places to lay the deceased to rest. As time goes by, however, gravesites are becoming scarce in North Korea, too. As a result, authorities officially recommend citizens to choose cremation, and local provinces as well as the capital of Pyongyang seek to construct more crematoriums. But North Korean residents do not like the idea very much.

Cremation is not common in North Korea. There are not many crematoriums in the country, so North Koreans may have to carry the body to a faraway place if they choose to cremate it. If people expressed their hope, while they were alive, to be buried in a certain place after death, a grave is dug in that place. Until two decades ago, many Pyongyang citizens would bury the deceased in nearby hills or mountains. Cremation facilities are inadequate in North Korea, and local people still opt for traditional burial.

If more cremation facilities are built, North Korea will likely urge local citizens to choose cremation over burial, in line with international trends. With funerals becoming more and more commercialized in North Korea, a major change is anticipated in the country’s funeral culture.