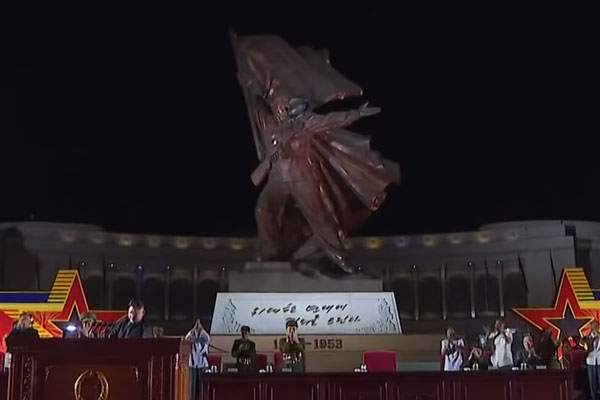 North Korea held the seventh national conference of war veterans in Pyongyang on July 27, which marked the 68th anniversary of the signing of the Korean War armistice agreement. Leader Kim Jong-un paid his respects to fallen North Korean soldiers at midnight on July 27 before attending the conference. A photo of the country’s Rodong Sinmun newspaper the next day shows that the event took place in the middle of the night.

Why did North Korea convene the mass gathering, although the country is faced with both internal and external difficulties such as a food shortage and international sanctions? Here is Cho Han-bum, senior researcher at the Korea Institute for National Unification, to explain.

In fact, North Korea is not in a situation where it can host the conference of war veterans. While the North postponed a conference of agricultural workers scheduled for July, it did hold the event of war veterans despite economic hardships and the COVID-19 pandemic. North Korea claims that it won the Korean War and describes the period of the war as a great era. By recalling the experience and historical legacy of the war, North Korea tries to overcome the current crisis.

During the conference, leader Kim Jong-un delivered a speech, urging the people to get over the crisis they face by upholding the spirit of war veterans or the war-victorious generation. Based on the heroic spirit of the veterans, North Korea seems to be attempting to ease escalating public jitters stemming from border closures and international sanctions and to achieve its goal of self-reliance. It also appears that the country is using the old veterans to strengthen ideological education for the younger generation.

In December last year, North Korea introduced a law banning reactionary thought and culture. Under the law, violators may face the death penalty. North Korea pays keen attention to ideological education for teenagers, in the belief that their ideological discipline is loosening. It argues that young people should learn the hard way and inherit the experience of the old veterans. Through the conference of war veterans, North Korea intends to show the younger generation what exemplary citizens should be like.

The Korean War ended in an armistice on July 27, 1953, three years after the war broke out. North Korea celebrates the day as a festive occasion, as it claims that it achieved a triumph in the war. In 1973, it designated July 27 as the Day of Victory in the Fatherland Liberation War. In 1996, the Day of Victory became a national holiday.

North Korea claims that South Korea invaded the North and it defended against the invasion in the Fatherland Liberation War. Of course, this is history distortion and fabrication. North Korea celebrates the armistice signing date as the Day of Victory, using the occasion to secure the legitimacy of the regime. The Korean War brought tragedy to the Korean people, but it contributed to strengthening one-man rule of North Korea’s founder Kim Il-sung, as other political factions in the North collapsed after the war. In other words, the war provided momentum to reinforce Kim Il-sung’s political authority. North Korea fabricated the truth about the tragic war and even glorified it to build political legitimacy.

North Korea held the first conference of war veterans in 1993, marking the 40th anniversary of the armistice. The second such event took place in 2012 after Kim Jong-un came to power. Afterwards, it was held in 2013, 2015, 2018, 2020 and this year. Analysts say that the young leader actively used the old veterans from early in his rule for the political purpose of inheriting their fighting spirit and tightening internal unity.

North Korea’s Rodong Sinmun newspaper said on Monday that the country is in a tough spot, comparing the triple whammy of the pandemic, prolonged international sanctions against the North and flood damage to a wartime situation. During the latest conference of war veterans, the North Korean leader also said that the current difficulties are no less harsh than those in the wartime situation, admitting the country’s hardships in front of old veterans.

Right after Kim Jong-un took power, he promised that North Koreans wouldn’t have to tighten their belts any more. But he has recently mentioned a food shortage himself. During a conference of cell secretaries of the party in April, he also said he was determined to wage a tougher “Arduous March.”

North Korea is faced with daunting challenges from international sanctions, border shutdowns to prevent COVID-19 and bad weather, such as extreme heat and drought. The country suffers from the worst difficulty under Kim Jong-un’s ten-year rule and the worst ever situation in the regime’s history. It seems the situation in North Korea is far more serious than it looks from the outside. In June, the leader issued a special order to distribute military rice to citizens. Nevertheless, food prices in some border regions are 30 to 40 percent higher than normal. Despite state intervention, the food situation has not improved.

Unlike the conference of war veterans last year, Kim Jong-un did not mention the phrase “nuclear deterrence” at this year’s event. While he emphasized the importance of military power amid the changing political situation, he made no specific mention of nuclear weapons.

North Korea cannot afford to stoke a crisis now. It cannot lift its border restrictions, due to the pandemic situation in China. The beleaguered North finds it very challenging even to handle domestic problems. That means the country needs to improve relations with South Korea and the U.S.  It may protest the South Korea-U.S. combined military exercises in the short term, but it may seek to mend ties with the two countries in the long term, as it badly needs a breakthrough.

The South Korean government’s role is absolutely important in the process.