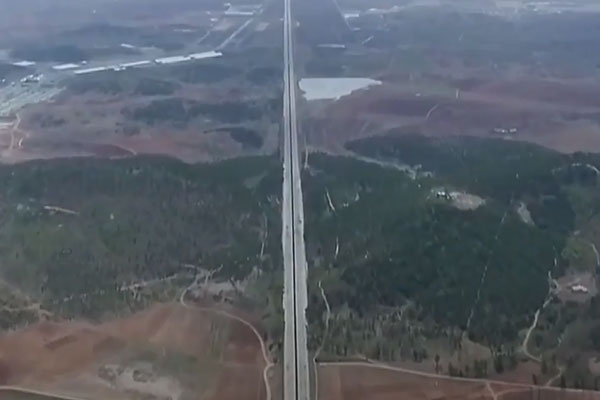 North Korea’s Road Act states that roads are the face of a country and the key indicator of economic development and civilization of that country. So, what are North Korean roads really like?

I would describe North Korean roads as a face with sleep in the eyes, unwashed for days. The kind of roads we generally think of are simply inconceivable in North Korea.

In North Korea, roads are only used for short-distance transport and play a role in assisting railways. Former leader Kim Il-sung once said that roads had the purpose of resolving the traffic problem of remote, mountainous regions and allowing agricultural equipment like cultivators to reach farmland. But roads should not be built on cropland. Turning farmland into a road is completely unacceptable. In short, hardly any modern, convenient road infrastructure is available in North Korea.

In North Korea, railways comprise the major part of the traffic network, with roads relegated to a secondary role. According to South Korea’s Statistics Korea, North Korean roads, as of 2019, were 26,180 kilometers in length, about 23 percent of South Korea’s.

Except highways, less than 10 percent of roads are paved in the North, and most of the main roads have two lanes or less. Roads are not smooth overall and they have many potholes. It comes as little surprise that vehicles run slowly, not exceeding 50 kilometers per hour. Also, road safety facilities are inadequate.

North Korean roads are divided into seven classes, ranging from highways to general roads with six different levels. I’ve examined many North Korean roads, including highways and level-1, -2 and -3 roads. Level-1 roadways are all unpaved. There are no drains and lights. They were like South Korean roads in the 1970s before roads were paved. Roads are one of the most underdeveloped types of infrastructure in North Korea.

North Korea announced the length of its roads for the first time in 1988, when it said it had a network of 75,500 kilometers of roads. By South Korean standards, however, only 25,000 to 30,000 kilometers of those roads can be called roads. On the remaining parts, two cars cannot move in opposite directions, as each road is only 3 meters wide. If a car runs on the road, there are only 15 centimeters left on each side. The narrow roads like farm roads are not classified as roads in South Korea, but the North includes all those roads in their road network. The quality of the roads is very poor. Tunnels and bridges, in particular, are extremely vulnerable to natural disasters including floods. After heavy rains, they are flooded quite often, with bridges carried away by water.

There are six highways or motorways in North Korea. The total length of the highways is 660 kilometers, about 14 percent of South Korea’s. North Korea’s first highway is the Pyongyang-Wonsan Motorway that was completed in 1978. It is a 196-kilometer-long, four-lane concrete pavement. Afterwards, more motorways were built one after another, including the Youth Hero Motorway that opened in 2000.

The Youth Hero Motorway connects Pyongyang with the major western port city of Nampo. To complete the 44-kilometer-long, ten-lane expressway, North Korea conducted a massive mobilization campaign, ordering students, office workers, and laborers to come out to assist in the construction project. The project was carried out under tough working conditions, as they worked almost manually without construction equipment. For example, workers were given medals, depending on how many gunnysacks they sewed. A video of construction scenes shows young workers making a mold out of wooden boards, pouring cement into the mold and singing songs while waiting for cement to dry. I rode in the car running on that motorway. The road condition was pretty bad, as the highway was not built with advanced equipment. The cracked road did not drain well, and the car began to vibrate when it got to about 60 kilometers per hour. North Korea highly boasts of this motorway, but it is actually in very poor condition.

In 2016, North Korea tested a missile on the Pyongyang-Gaeseong Motorway. It is speculated that the country chose the paved highway for the missile test-firing to avoid vibration while moving.

North Korea’s Road Act prohibits citizens from walking or riding a bicycle on highways and from raising dogs or letting domestic animals roam near the highways. Under the law, only authorized vehicles are allowed to run on the highways. That is, not all cars can use the highways.

If the North Korean highways were used for cargo and passenger transportation, the country could solve transport-related problems considerably. But vehicle operation is strictly controlled on the highways. They can only be used by military vehicles, inter-city buses, emergency transport vehicles and those carrying local people visiting revolutionary sites or foreign tourists. In the case of inter-Korean trade, South Korean cargo is loaded on a ship at Incheon Port, and the cargo is unloaded at North Korea’s Nampo Port. Using a highway, it would only take an hour and a half to transport the cargo from Nampo to Pyongyang. But in reality, goods are carried via another road, on which vehicles run at 20 to 30 kilometers per hour. This is ridiculous. If and when North Korea has to transport a greater volume of products through inter-Korean trade, the road restrictions could be lifted.

North Korea has imposed tolls on the Pyongyang-Wonsan Motorway since 2018. The tolls vary, depending on the type of vehicle and the travel distance. It is not known why North Korea charges tolls on the highway, but it is assumed that the country has the road modernization project in mind.

In a major change, North Korea turned the Pyongyang-Wonsan Motorway into a toll road in 2018 and set up toll booths. It appears that a car is required to pay about 8 euros for a round trip on the highway. It seems North Korea wants to show foreign investors that they can retrieve their investment money.

In the past, North Korea would collect tolls only from foreign companies. But it revised a law to collect tolls from all road users. By adopting the principle of a user charge, North Korea is apparently seeking to renovate and modernize its road infrastructure.

We’ll have to wait and see how North Korea’s road modernization project will change its society. Next time, we’ll learn about the country’s road traffic.