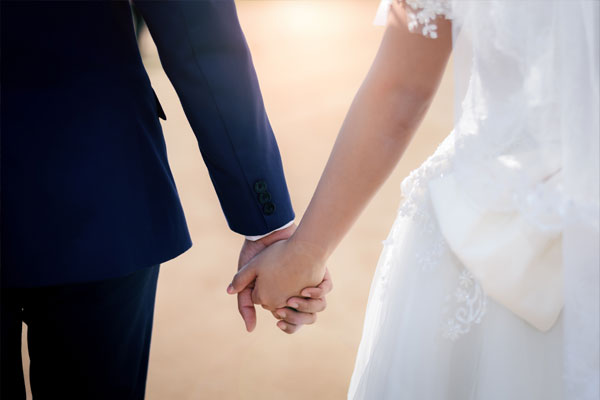 In North Korea, a family is regarded as the basic unit of society. The country places great emphasis on revolution and ideological refinement within the family. In a political sense, a marriage forms a cell or the lowest unit, of which society is composed. Officially, married couples are seen as comrades who have the same goal of achieving social revolution. In reality, though, their lives are not different from those of their South Korean counterparts.

In general, a man and a woman who love each other get married and start a family, in accordance with customs or law. Speaking of marriage, there might be slight differences in formality and characteristics, depending on the region. Today, we’ll learn about North Korea’s wedding culture from Cho Jeong-ah, Vice President of the Korea Institute for National Unification.

North Korea’s family law guarantees that men and women who reached the marriageable age can choose their spouse they want and tie the knot freely. A marriage is considered valid only when it is registered with the relevant office.

In the socialist North, the state provides food and homes to households, which are formed after marriages. That is, it is necessary for an adult to get married and belong to a household to receive food rations and other supplies as well as a house. After the Arduous March period in the 1990s, the state rationing system collapsed in most regions in North Korea. It means households have lost their meaning as a rationing unit recognized by the state.

In North Korea, there’s no concept of the wedding industry whatsoever. Traditionally, wedding ceremonies are held at the brides’ or grooms’ houses, and the family members make all necessary preparations including food. For the wedding ceremony, brides are typically dressed in the Korean traditional clothes of hanbok, while grooms are clad in Western suits. Wedding guests sing to celebrate the wedding. Wedding food varies from region to region, but in general, rice cakes and noodles are offered.

There is no particular wedding hall in North Korea, although some changes have been perceived in the local wedding scene lately. The groom typically visits the bride’s house and holds a ceremony there. The bride then visits the groom’s house to repeat the same event. Through the two separate ceremonies, the couple’s wedding is proclaimed. This is similar to Korean traditional wedding in ancient times. After North Korea was hit hard by economic hardships during the Arduous March period, wedding ceremonies have been held only once, generally at the groom’s house, because throwing a party twice costs much.

Since the Arduous March period, wedding trends have become increasingly polarized in North Korea. Members of the middle and upper classes prefer to hold a wedding ceremony at restaurants, rather than homes. They sometimes hire a buffet caterer for the wedding reception.

It is said that North Korea’s traditional wedding trends have changed a lot. Wealthy people rent a large restaurant for a wedding and share food with their friends and relatives there.

During the wedding ceremonies held by well-off families, the grooms wear a tailcoat and the brides, a wedding dress. Sometimes, professional artists are invited to the ceremonies to hold a performance.

Unlike in South Korea, couples in the North go to a politically significant place after their wedding ceremony to be recognized as married couples officially. In Pyongyang, for example, couples visit the statues of former leaders Kim Il-sung and Kim Jong-il, offer a wreath and take commemorative photos there. This is a very important ritual.

For brides and grooms, honeymoon is as important as a wedding ceremony. Some take a trip to overseas vacation spots to make happy memories. Others do not spend much on their wedding ceremony but travel around the world instead. In some cases, couples go camping or hiking, or choose to hold some meaningful events, like donations.

In North Korea, it is difficult for couples to travel for a honeymoon, except for special cases.

It is not easy for North Korean residents to travel, because a travel certificate is required to enter many regions including Pyongyang and border areas. Also, transportation means are not developed much in the country. Therefore, ordinary citizens find it hard to travel to other regions for a honeymoon. They simply look around nearby scenic spots like a seaside park and take photos. But I heard that wealthy people who can afford to have a car, or rent a car or a taxi go on a honeymoon trip.

In South Korea, wedding guests mostly give a monetary gift to couples who get married. A similar tradition is practiced in North Korea, too. In the North, guests also give rice or daily necessities as a gift.

For wedding gifts and goods, the groom gives clothes or cosmetics to the bride, while the bride prepares for things needed for a new life.

In North Korea, brides usually prepare five furniture items and six electronic goods. The five furniture pieces are a blanket bedding cabinet, a wardrobe, a cupboard, a bookshelf and a decoration cabinet. Some include a shoe closet, instead of a decoration cabinet. The six home appliances are a freezer, a TV set, an electric fan, a recorder, a sewing machine and a camera.

These days, it is difficult for the state to provide homes to the people. As a result, couples often share the cost of preparing for a house and wedding goods. In many cases, a person who is more financially capable, regardless of the gender, pays more. Like in South Korea, weddings vary in the North, depending on one’s financial means.

It is said that many North Koreans, especially young people, have changed their perception about marriage these days. Next time, we’ll learn about the changing wedding trends in North Korea.