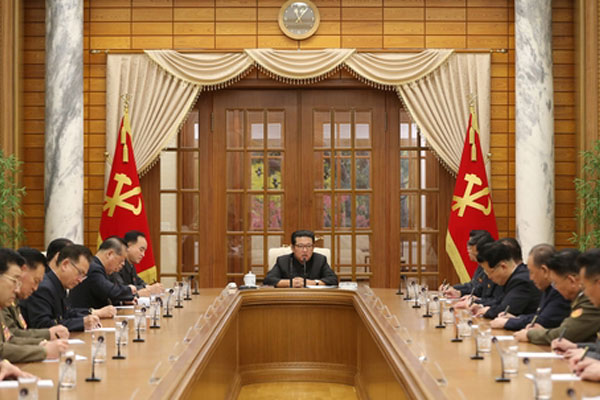 North Korean state media reported last week that the 4th plenary session of the 8th Central Committee of the Workers’ Party would be held in late December to review the implementation of the major party and state projects for 2021 and to decide on new plans for next year. The plenary session, if held as planned, will mark the 11th such meeting under Kim Jong-un’s rule and the fourth this year alone. Here is Hong Min, researcher at the Korea Institute for National Unification, with more.

Since 2019, North Korea has made it a rule to convene a plenary meeting of the party’s Central Committee at the year’s end or at the beginning of the year. Previously, the top leader would announce his New Year’s message to unveil the policy plans for the coming year. But now, the role seems to be played by the party, not the leader. In fact, Kim Jong-un has been strengthening party-centered leadership since his fifth or sixth year in office.

If North Korea fails to fulfill certain goals presented by the leader during his New Year’s speech, the leader would feel pressured. But policies decided and announced by the party will place less of a burden on the leader. It is also in line with the leader’s push to restore a party-centered state system.

In North Korea, important decisions are all made at the congress of the party. The country has held the party congress eight times so far, with the first event taking place on October 10, 1945, and the eighth one, in January this year. Between the rare congresses, plenary sessions of the party’s Central Committee oversee and carry out important state projects.

In the socialist North, it is the party that leads and decides on everything. The congress is officially the highest decision-making body of the party. The congress is supposed to be held every five years to announce strategies and directions of long-term policies. Between the congresses, plenary sessions of the party’s Central Committee handle pending issues that need to be resolved right away. They mostly deal with one-or two-year strategies or policies.

No party congress was ever held during the years of former leader Kim Jong-il. Current leader Kim Jong-un, in contrast, has presided over two congress meetings, one in 2016 and the other in 2021.

Under his rule, plenary sessions of the party’s Central Committee have been held ten times so far. The sessions had usually been held for one day, but recent meetings lasted for as long as four days. That is, the sessions have become more frequent and longer.

The North Korean leader has often visited military or industrial sites to point out problems and give instructions. Although this “field guidance” is a key aspect of his rule, it is difficult for the top leader to conduct guidance tours in the pandemic. Now, the leader is using party meetings to give directions and to show to the people that he is making great efforts to improve their livelihood. Not only plenary sessions but other party meetings have also been held quite often, with the leader himself giving lectures in front of officials. State management through meetings has become almost customary.

Also, Kim Jong-un has actively restored a party-centered management structure, a major shift from the military-first policy advocated by his predecessor. Since the North held the seventh party congress in 2016 for the first time in 36 years, the country has revived various meetings, during which major issues have been discussed. The frequent plenary sessions are considered part of the leader’s efforts to reinforce a party-centered leadership system.

Analysts say that party meetings have restored their status as an official policy decision body since Kim took power, pointing out that important policies have actually been decided during party sessions. The plenary session scheduled for later this month is also expected to decide on the country’s major policy direction for next year.

North Korea announced an ambitious five-year economic development plan early this year, with the current leader entering his tenth year in power. From the beginning of the year, the country has urged the public to carry out the plan successfully. At the upcoming party conference, the North will closely review how the plan has proceeded this year. Based on the evaluation, the country will find out what to correct and come up with new economic tasks for the second year of the plan. This will comprise the major agenda of the party meeting this month.

At the third plenary session of the 8th Central Committee of the party in June, North Korea said that the country needs to prepare for both “dialogue and confrontation” with the U.S.  Pyongyang may possibly announce its foreign policy direction at the upcoming session.

Regarding its policy toward the U.S. and South Korea, North Korea will likely maintain its previous position that was unveiled in Kim Jong-un’s speeches this year. Since 2019, Pyongyang has consistently expressed its determination to continue to develop strategic and tactical weapons. The North has also indicated that it may engage in dialogue with the U.S. and South Korea if they withdraw their hostile policy against the regime. I guess North Korea will keep this two-track strategy in place. This year, the North officially announced a five-year plan for the development of the defense science and the weapons system, indicating that it will continue to advance its nuclear arsenal. It could announce more details about the defense development plan.

Meanwhile, South Korea’s national security advisor Suh Hoon and China’s foreign affairs chief Yang Jiechi held a meeting in the Chinese city of Tianjin early this month. At the meeting, Yang said that China supports South Korea’s push to officially declare an end to the Korean War. Attention turns to whether North Korea will announce any message about the end-of-war declaration issue at the upcoming party session.

In the “Crop Prospects and Food Situation” report, the Food and Agriculture Organization included North Korea in its list of countries in need of external aid for food. As the major reason affecting North Korea’s food shortage, the report cited limited access of food and humanitarian assistance as a result of the country’s tight border controls amid the pandemic. While North Korea is faced with an unstable situation both internally and externally, we’ll have to wait and see what messages the North will announce at the prospective party meeting.