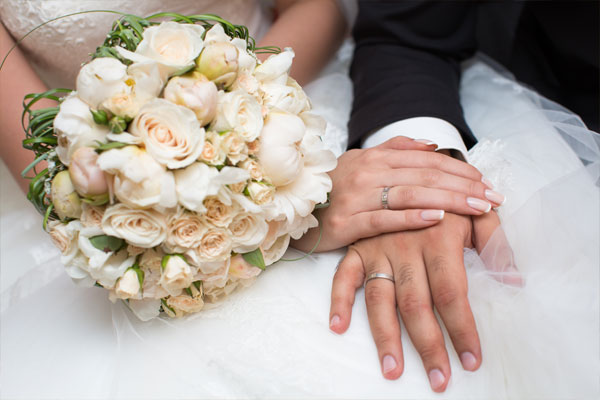 Previously, relatives or senior officials at enterprises would arrange a marriage for young couples in North Korea. In other words, it was common for men and women from families of similar backgrounds to tie the knot. The phenomenon is described in North Korea as “swallows with swallows, magpies with magpies.”

But these days, many people prefer free love, with love marriages becoming more common. As a result, the number of marriages between “swallows and magpies” is on the rise, in a shift from the traditional norm.

In North Korea, young people are changing their perception about marriage. Today, we’ll learn about the changing wedding trends in North Korea from Cho Jeong-ah, Vice President of the Korea Institute for National Unification.

According to North Korea’s family law, marriage is allowed from the age of 18 for men and 17 for women. Until the early 2000s, the ideal age to marry was considered between 23 and 25 for women and between 27 and 30 for men. But these days, couples show a trend of late marriages.

Statistics in 2014 show that the average age for a first-time marriage is 25 for women and 28 for men in North Korea—much younger than that of South Koreans’. According to North Korean defectors who have recently come to the South, North Korean people, especially highly educated women, tend to get married late. I guess young North Korean women find their lives pretty tough. Once they marry, they have to support their husbands, do household chores, take care of children and even earn money. I can understand many women don’t want to start such a busy, difficult life early on. Those who hope to build career, in particular, should graduate from college and become a party member. They are required to serve in the military for more than three years to obtain a party membership. The whole procedure takes time. Therefore, some women postpone marriage until they are in the late 20s or early 30s.

Qualities for an ideal spouse have also changed. Formerly, women preferred men who worked at powerful state organizations. But these days, men who can travel abroad or earn foreign money easily such as diplomats and trade workers are considered to be desired husbands.

On top of men’s family status and party membership, their occupation, political background, economic ability and growth potential are also taken into consideration as well. Traditionally, it has been believed that men in uniform including military officers have power, earn much money and guarantee a stable life. Many North Korean women work at the private market after they get married. Therefore, they look out for men who are powerful enough to support their market activities. Men who run big business, drivers, professionals and those who work at the party or administrative agencies are regarded as a good partner. Speaking of growth potential, smart party members who have graduated from college are preferred.

In North Korea, desired would-be husbands are those who love women passionately, graduated from college, have a party membership and have special skills. Preferred would-be wives, on the other hand, are those who have a lot of cash, graduated from college, have a good family tradition and are attractive. Cho talks about other criteria for choosing a good bride.

Women who have a cell phone and a motorcycle are favored as a spouse, because it means those women are wealthy. Men who are economically unstable also opt for women who can financially support their study and livelihood as well.

Men with low income prefer women who carry out market activities successfully, that is, who have a strong ability to maintain their livelihood. If men are rich themselves and have a good family background, they don’t necessarily look for women who can make money. Rather, they wish to have a stylish, educated wife who graduated from college.

Unlike South Korean citizens, North Korean people are not allowed to choose where they want to live. When they get jobs after graduating from high school or college, the state assigns jobs to them. It means the state decides where they should live. Mostly, people are given jobs around their hometowns. There are two exceptions to this. First, some people get jobs in places other than their hometowns. Second, they can move to other regions through marriage. If a man who does not live in Pyongyang marries a woman who is a Pyongyang citizen, the man can also become a Pyongyang resident. The opposite is also true. If a woman marries a Pyongyang citizen and lives in Pyongyang, her children can also become Pyongyang citizens. North Koreans prefer those who live in Pyongyang as a would-be spouse, but it is far from easy to find such a spouse.

In recent years, North Koreans have changed their perception about not only ideal spouse conditions but marriage itself. Some young couples do not register their marriage but just live together. More emphasis has been placed on women’s financial ability, so women’s age or remarriage doesn’t really matter in many cases.

In North Korea, it is not easy to get divorced and the process takes time. Therefore, many couples choose not to register their marriage and live together for a while. Only when they find everything is fine, do they register their marriage. Although it is hard to generalize, cases of the so-called premarital cohabitation are found in border areas. In the past, living together without a wedding ceremony was considered to be a social taboo, but it has become more acceptable now in some regions.

Sometimes, men who are smart but poor are looking for women who can afford to support them. Previously, it was difficult for ex-married women to marry men who had never got hitched before. But men’s first and their wives’ second marriage isn’t a problem now. Many changes have been found in North Korea’s traditional marriage system.

In the North, couples should register their marriage so they can be provided with homes by the state and the family members get food rations through the head of each household. However, the collapse of the state rationing system after the Arduous March period made it difficult for women to receive benefits even if they were registered as dependents of their husbands. Also, young women’s awareness of family and society is clearly different from that of the older generation. Naturally, North Koreans’ perception about marriage is changing.

I’d say North Korea’s marriage system is shaking. Women typically lived in the patriarchal and discriminatory family structure. But nowadays, more and more women are pursuing their own happiness, desire and future success. Financially successful women actually realize their wish. The ongoing change in the family, marriage structures will likely accelerate. Just like couples in South Korea, those in the North may get married late and have fewer children. Many North Korean women may choose to stay single, while the divorce rate could rise.

The changing wedding trends in North Korea will likely lead to changes in family relations and the society overall.