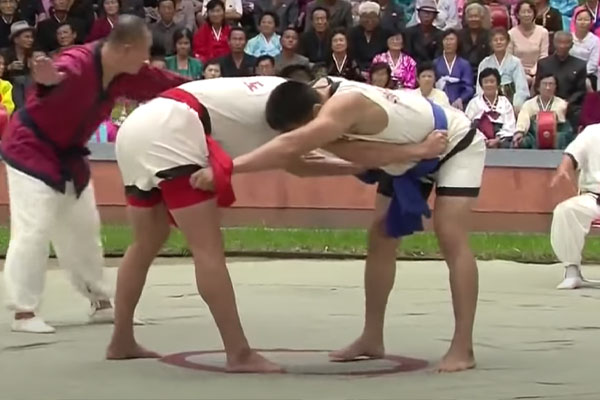 At its 13th session in Port Louis, Mauritius, on November 26, 2018, UNESCO’s Intergovernmental Committee for the Safeguarding of the Intangible Cultural Heritage decided to approve the joint inscription of “ssireum” of South and North Korea on the Representative List of the Intangible Cultural Heritage of Humanity. The official name of the entry registered with UNESCO is “traditional Korean wrestling, ssirum/ssireum.”

Traditional Korean wrestling known as ssireum is a popular folk game and sport widely enjoyed in Korea. How differently has this form of entertainment evolved in the two Koreas, which have been divided over the last seven decades?

South and North Korea first exchanged their opinions about ssireum’s joint registration during a regional meeting for Intangible Cultural Heritage Safeguarding in Northeast Asia that was held in Ulaanbaatar, Mongolia in July 2014. But North Korea submitted a separate application for the UNESCO inscription of ssireum in March 2015, and South Korea followed suit in March the following year. In October 2018, South Korean President Moon Jae-in discussed the joint inscription issue with UNESCO Director-General Audrey Azoulay during his state visit to France. Afterwards, UNNESCO sent a special envoy to Pyongyang to facilitate the registration process.

UNESCO recognized that ssireum in the two Koreas has commonalities regarding its social and cultural significance in the community. The Intergovernmental Committee decided to approve the joint bid, with the unanimous support of its 24 members. The decision is considered a symbolic step toward inter-Korean peace and reconciliation.

The oldest records of ssireum in Korean history were found on mural paintings of Goguryeo tombs, which are estimated to have been created between the fourth and fifth centuries. Therefore, it seems the origin of ssireum dates back to before that.

Scenes of ssireum appear from wall paintings of the Goguryeo era to genre paintings of the Joseon Dynasty. It is not just a game but a ritual associated with seasonal customs that coincide with the annual agricultural cycle. In ancient times, village people would predict a good or bad harvest in the beginning of the year, pray for rain during a drought and promote cooperation and solidarity during the busy farming season. Ssireum was held on those occasions. During the rice-planting season, for example, different villages held a ssireum contest to decide which village would irrigate paddies first. The physical game was not only about individuals’ strength and skills but also about the competence of the whole community. Attended and supported by men and women of all ages, ssireum events served as a festival venue for unity, connection and harmony of villages and communities. Ssireum is still practiced today as a symbol of Korean cultural identity, a time-honored martial art and a popular pastime of the people. It is a precious legacy, in which the Korean language has been kept intact for thousands of years. Indigenous Korean words are found in terms about ssireum’s clothing and techniques. Most of the terms vividly manifest the gestures and skills of the people in pure Korean words.

South Korean people are pretty familiar with ssireum. There are many famous ssireum athletes and students learn about the sport in school. In North Korea, too, ssireum enjoys great popularity. It is said that North Korea holds ssireum events on traditional holidays such as Dano and Chuseok.

North Korea included ssireum in the national list of Intangible Cultural Heritage in 2013. Ssireum is practiced all across the nation, with the Pyongyang region taking the lead in setting relevant rules and preserving the tradition. Ssireum events joined by ordinary citizens and workers at enterprise during traditional holidays are considered different from ssireum competitions participated in by athletes. North Korea holds a nationwide ssireum contest every September, ahead of the Chuseok holiday. In the North, ssireum represents and promotes each region. For instance, a laborer named Cho Myong-jin from a shoe factory in Sinuiju won the national ssireum competition in 2015. His hometown is Ryongchon County in North Pyongan Province. After his win, he was introduced as the pride of the region.

In fact, ssireum is not unique to Korea. Similar wrestling traditions have been passed down the generations in various parts of the world, including Mongolia, Japan, China, Tibet and Vietnam. But Korean ssireum is distinguished by the use of satpa, which refers to a long fabric strap that players wrap around their waist and one thigh. When playing, each wrestler grabs the other’s strap. Using the strap, the players adjust strength and deploy various techniques to bring each other down. The player whose body part, other than the feet, touches the ground first loses the game. This type of ssireum is only found in Korea.

The use of satpa is the most distinctive part of ssireum, both in South and North Korea. In other types of wrestling, players may use a belt around their waist. But satpa tied around players’ waist and one thigh is only one of its kind. Wrestlers employ diverse techniques using satpa as leverage, making the sport more dynamic and intense. It’s thrilling to see a small athlete send a large one to the ground by using satpa effectively. China used different words to refer to Korean ssireum, indicating that the traditional Korean wrestling was distinguished from similar sports in neighboring countries.

As South and North Korea have been divided for over 70 years, ssireum has developed slightly differently in the two sides, in terms of techniques, terms, weight class and the arena. It is understandable that the two Koreas show difference in ssireum rules and game operations.

Despite the long national division, South and North Korea cherish their shared memory about ssireum and enjoy it on traditional holidays. Hopefully, they could work together to globalize the traditional Korean wrestling.

Each region in North Korea preserves its own ssireum traditions and techniques, which would be greatly helpful for reviving the diversity of ssireum. Following ssireum’s joint registration as a world cultural heritage, South and North Korea are searching for what they have in common. South Korea is interested in indigenous words and old rules found in North Korean ssireum, while North Korea is eager to learn about South Korean ssireum culture and rules that would appeal to global audiences. By complementing each other and enriching ssireum resources, the two sides could jointly host ssireum competitions. Through more frequent bilateral contact and exchanges in this area, they might be able to hold ssireum events not only for fans in Northeast Asia but those in the entire world to contribute to globalizing ssireum.

It is hoped that ssireum will take root as a sport to be enjoyed by people the world over.