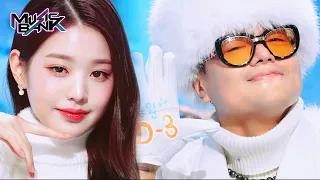 The hottest clip of this week is JYP and his comeback track with “Groove Back.” The solo artist is back with a dance track with Dynamic Duo member and rapper, Gaeko. “Groove Back” has an interesting past, considering how the song was originally released last year as a mere dance challenge in the form of a few seconds-long Tik Tok song. The track was released in its current form after it received high praise and interest from fans all over the world. J.Y. Park’s comeback comes after his last popular duet with solo singer, Sunmi, with “When We Disco”, two years ago. This week, J.Y. Park had enlisted the help of IVE member, Wonyoung during his performance. Fans are anticipating the appearance of other stars during the singer’s promotions with “Groove Back.”