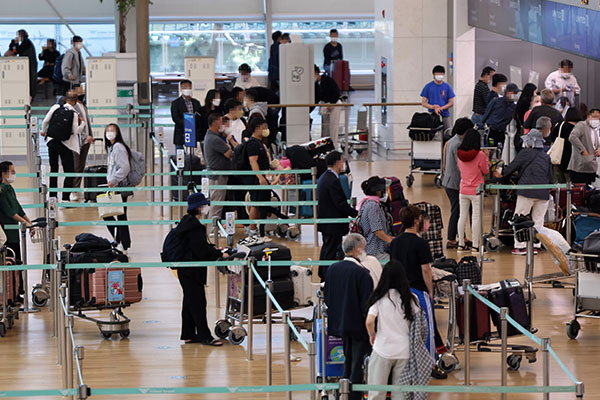 Health authorities on Sunday announced the implementation of the new policy the following day.

Previously, people entering the nation were obligated to submit a medical certificate stating they tested negative for COVID-19 with a PCR test taken within the last 48 hours.

However, under the new rule, people are also allowed to enter the nation upon submitting a negative rapid antigen test result issued within 24 hours prior to entry.

The latest move is expected to improve convenience and lessen cost burdens for travelers coming to South Korea, with the government noting that PCR tests are more costly and harder to obtain abroad.

The government also decided to continue allowing in-person visits at nursing homes for the time being. Initially, the rule was set to conclude last Sunday.

Meanwhile, South Korea's COVID-19 risk level was dropped to “low” across the nation for the first time since the implementation of the risk assessment system.

The Central Disease Control Headquarters on Tuesday assessed the COVID-19 risk levels for the capital and all other regions as “low” for the third week of May, from the 15th to the 21st.

The infection reproduction number stood at point-eight-three, remaining below one for eight straight weeks.

This marks the first time the entire country was assessed to be low-risk since the government adopted the system last November with the launch of its “Living with COVID-19” scheme.

The level remained at “very high” from early November to late December of last year as well as during March of this year.