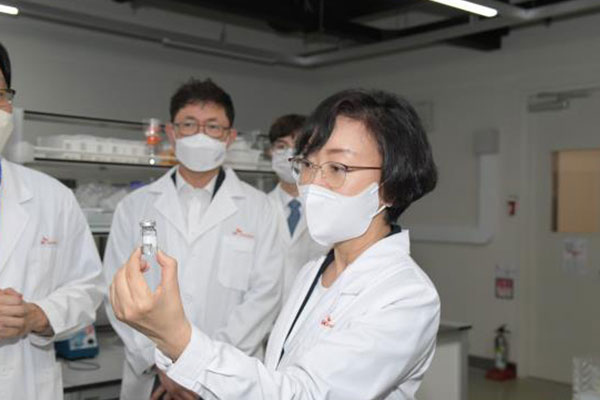 The country's first COVID-19 vaccine candidate, developed by SK Bioscience, has received a recommendation for approval from a government advisory group.

According to the Ministry of Food and Drug Safety on Monday, the expert panel recommended approval of vaccine candidate GBP510 the previous day based on safety and efficacy.

Jointly developed with the Institute for Protein Design at the University of Washington, GBP510, also known as SKYCovione, is a recombinant-protein vaccine based on novel two-component nanoparticles that can maximize the immune effect.

It is the nation's first COVID-19 vaccine candidate to have passed all three phases of clinical trials. The third phase trial of around four-thousand adults was conducted in six countries – Thailand, Vietnam, New Zealand, Ukraine, the Philippines and South Korea.

The candidate is designed to be administered in two rounds with a four-week interval.

The advisory committee recommended that the government monitor and further assess a suspected adverse reaction involving rapidly progressive glomerulonephritis after one case was reported during the trial phase.

The head of the National Institute of Food and Drug Safety Evaluation said authorities plan to convene the final review committee within the week to decide on the approval.

SK Bioscience hopes to secure state approval for the vaccine candidate's commercial use starting the second half of the year.