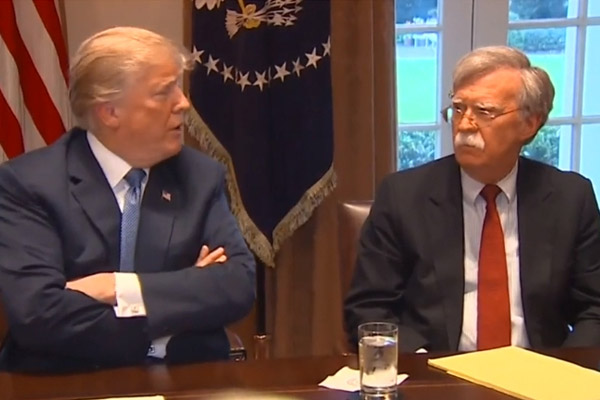 Anchor: U.S. President Donald Trump said that former National Security Adviser John Bolton set back denuclearization talks by suggesting the "Libya Model" for North Korea. The comments came a day after Bolton was sacked from his position, apparently via Twitter.
Hong Suhryung has the report.

Trump shared the position while speaking to reporters at the White House on Wednesday, a day after he had tweeted that Bolton would no longer be serving as his top security adviser.

The U.S. president chastised Bolton for suggesting that Washington was looking at a “Libya Model” to solve the North Korea nuclear issue.

[Sound bite: US President Donald Trump]
“But we were setback very badly when John Bolton talked about the Libyan model and he made a mistake. And as soon as he mentioned that - the Libyan model, what a disaster. Take a look at what happened to Gaddafi with the Libya model and he's using that to make a deal with North Korea? And I don't blame Kim Jong-un for what he said after that. That he wanted nothing to do with John Bolton. And that's not a question of being tough, that's a question of being not smart to say something like that.”

The model was suggested by Bolton last year before the June 12 Singapore summit between Trump and North Korean leader Kim Jong-un. In 2003, Libyan leader Muammar Gaddafi promised to relinquish his nuclear program for economic benefits that would follow after full denuclearization.

Less than a decade later, the U.S. and its allies launched military action against Libya and Gaddafi was killed by anti-government rebels.

Pyongyang, apparently taking note, has voiced strong opposition to the denuclearization first, compensation second model, threatening to pull out from bilateral talks with the U.S. entirely.

It remains unclear who will replace Bolton and how he or she will approach the North Korea nuclear issue. When asked who his fourth national security adviser would be, Trump said that he had some people in mind, and that the announcement would be made next week.

Bolton was released from his post Tuesday after a tweet from the U.S. president said that his services were no longer needed at the White House. Bolton, however, maintains that he resigned at his own will.