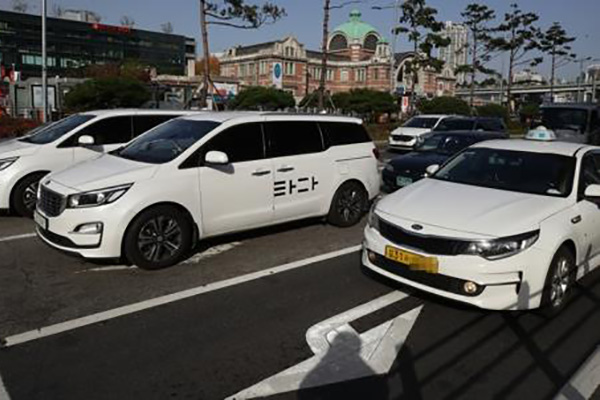 Anchor: Controversy has reignited over South Korea's ride-hailing platform Tada after the heads of the company were indicted this week on charges of running an illegal transportation service. The taxi industry says Tada needs to be shut down, but local startups are raising concerns that it will lead to excessive state regulation.
Choi You Sun reports.

Report: The taxi industry on Tuesday hailed the prosecution's decision to indict the operator of the ride-hailing service called Tada on charges of running an illegal business.

Taxi industry groups called for the termination Tada after the indictments of Lee Jae-woong, the head of car-sharing app SoCar, and Park Jae-uk, the head of its rental car-hailing unit VCNC, which runs Tada. They also took aim at the Transportation Ministry and other mobility platforms.

In a joint press conference with independent lawmaker Kim Kyung-jin, the Seoul Private Taxi Association said the government should be held accountable for dereliction of duty if it fails to shut down Tada.

In February, an association of taxi drivers in Seoul filed a complaint against the two businessmen, claiming Tada threatens their livelihood and violates the country's transportation law that bans rented vehicles from offering rides in exchange for money.

On Monday, the Seoul Central District Prosecutors' Office indicted without detention Lee and Park on charges of operating a passenger transportation business without a license.

While SoCar argues its business is within legal boundaries based on a written exception that allows rented vans with eleven to 15 seats to be offered with drivers, the prosecution considered Tada to be a paid taxi service, rather than a vehicle rental service.

All passenger transportation service providers are required to obtain a license from the transport minister or register with a local government.

Lee responded to the charges on his social media account, criticizing the prosecution for turning a blind eye to the changing times, especially as it came on the same day President Moon Jae-in vowed to further ease regulations on new technologies.