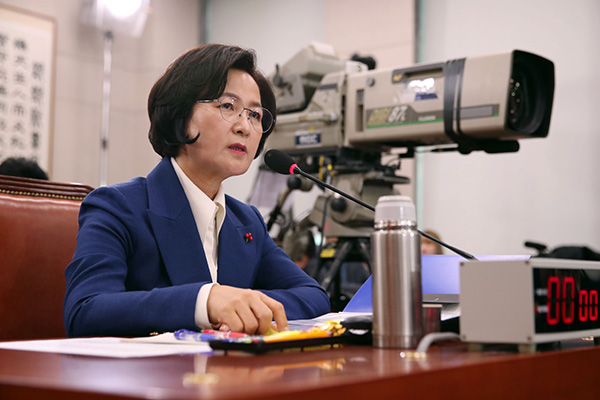 Anchor: President Moon Jae-in's pick for new justice minister faced lawmakers during her confirmation hearing on Monday. While the justice minister-nominee championed the government's criminal justice reform drive, she refused to comment on whether she'd support reshuffling the prosecution.
Choi You Sun has the details.

Report: Justice minister-nominee Choo Mi-ae said she hopes the National Assembly passes the contentious bills to reform the prosecution and establish an independent body to investigate corruption by high-ranking officials.

During her confirmation hearing on Monday, Choo emphasized that the South Korean people are calling for dispersion of the prosecution's excessive power and prevention of corruption by high-ranking officials through the reforms.

Asked whether she will vote for parliamentary approval of the bill at a plenary session on Monday afternoon, the nominee said she wants to take part in the process to complete the Moon Jae-in administration's reform drive.

Regarding the state investigative agency's objection to the bill, Choo said the prosecution will need to respect the will of the people, as well as the Assembly's reasonable decision.

The nominee, however, declined to comment on personnel appointments at the prosecution, when asked if she planned to dismiss Prosecutor General Yoon Seok-youl and reshuffle prosecutors involved in ongoing probes targeting ruling camp figures.

Choo said she was never briefed on an impending reshuffle, stressing the justice minister only holds the right to recommend nominees to the president.

The previous Justice Minister, Cho Kuk, resigned 35 days after his appointment amid an intense investigation into him and his family by the prosecution, led by Yoon.

The five-term ruling Democratic Party(DP) lawmaker, who headed the DP between 2016 and 2018, denied any involvement in the alleged election-meddling by the presidential office during last year's local elections.

Choo said the party is the principal agent in an election and no one outside the party can interfere in the process.

Choo's nomination earlier this month came nearly two months after the former minister, Cho Kuk, resigned in mid-October amid an investigation into alleged improprieties involving him and his family.