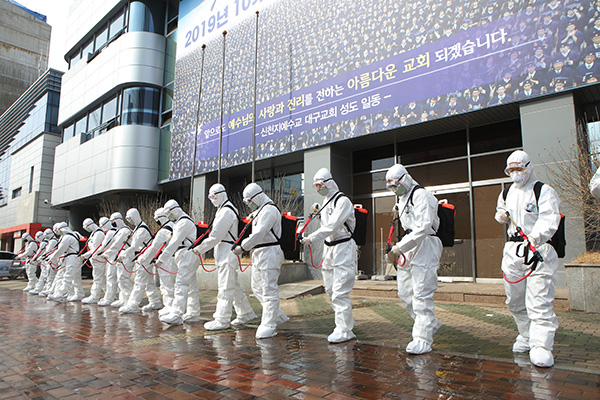 More than 60 percent of Shincheonji religious sect members in Daegu have been diagnosed with COVID-19.

South Korea's central disaster and safety countermeasures headquarters announced the finding in a briefing on Tuesday, while revealing the government had completed 99 percent of a nationwide survey on members of the minor religious group at the center of the massive outbreak in the country.

Vice Health Minister Kim Gang-lip, who is also deputy chief of the headquarters, said they secured a list of 310-thousand Shincheonji adherents and distributed a partial list that includes 195-thousand members and 44-thousand trainees to local governments.

He said four-thousand-300 members of the Daegu branch of the Shincheonji Church of Jesus have been tested for the new coronavirus and around two-thousand-600 of them, or 62 percent, were diagnosed with the disease.

The figure is in stark contrast to tallies from other regions, where only one-point-seven percent of Shincheonji members on average were confirmed to be infected.

Vice Minister Kim said all of the sect's followers in Daegu have been put under quarantine at home, regardless of their symptoms, while their fellow members in other regions are in self-quarantine or under active monitoring.

Noting that community spread of the new virus could have advanced beyond the religious group, Kim said the government also plans to expand testing to non-Shincheonji followers in the city as well.

Among ordinary Daegu citizens, around 11-thousand have been tested for the virus so far, and one-thousand-300 of them were found to have the virus. Health authorities suspect many of them are family members or acquaintances of Shincheonji followers.
Share
Print
List