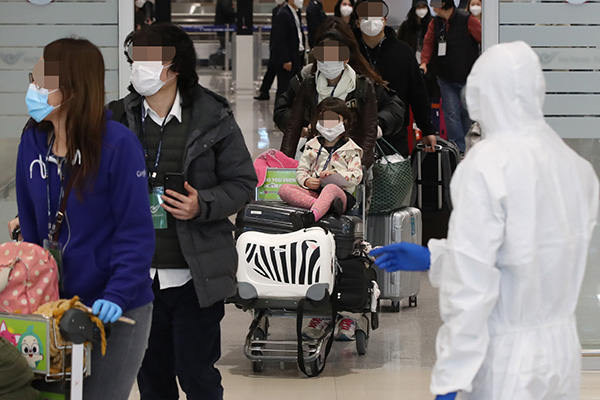 Anchor: South Koreans around the world are rushing to return home amid growing concerns surrounding the novel coronavirus pandemic. While some, like those in the virus-hit Italy, were repatriated this week on government-chartered planes, others are seeking arrangements through airlines or even multinational cooperation.
Choi You Sun reports.

Report: According to the South Korean Embassy in Italy, a second government chartered flight evacuating 205 South Koreans from the virus-hit country took off from Milan late Wednesday.

Upon their arrival Thursday afternoon, those who show symptoms will immediately be tested for COVID-19.

Returnees without symptoms will be transported to a state quarantine facility in Cheonan, South Chungcheong Province, for two rounds of COVID-19 testing over the next five days.

If everyone tests negative, they will go into self-quarantine, but if even one person tests positive, the entire group will have to be isolated at the facility for two weeks.

The first chartered plane carrying 309 people from Italy arrived on Wednesday. One passenger from that flight tested positive and was sequestered for treatment.

Around one-thousand South Koreans in India and Nepal are scheduled to return home next week on a number of chartered or special Korean Air flights, while Korean communities in Bangladesh, Sri Lanka and Pakistan are trying to make similar arrangements.

A growing number of South Koreans in Africa are also returning home on chartered planes arranged through multilateral cooperation.

Some 66 South Koreans in Madagascar and Cameroon were repatriated on an Ethiopian Airlines flight that was organized jointly by a number of diplomatic missions, including those of the United States, Japan, Germany and Britain.

To check up on the coronavirus situation across the continent and to discuss protecting the safety of Korean nationals, Foreign Minister Kang Kyung-wha led a video conference on Wednesday with the heads of diplomatic missions in Africa.

Kang urged the envoys to maintain close communication with the government of their host country to minimize inconveniences and damage for South Koreans.
Choi You Sun, KBS World Radio News.
Share
Print
List