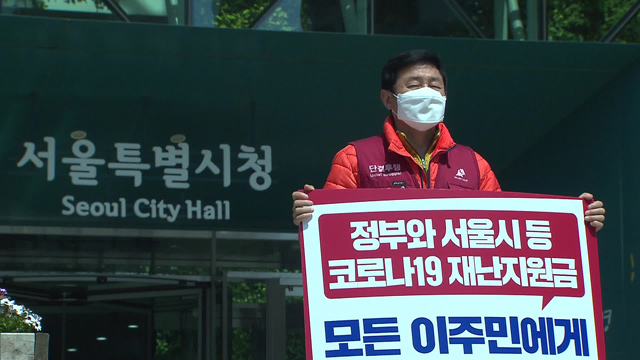 Anchor: Local governments in South Korea are paying emergency financial assistance to those facing difficulties due to the COVID-19 outbreak. However, the measures do not apply to many tax-paying foreigners.
Kim Bum-soo has more on this issue.

[Sound bite: Chinese immigrant in Seoul (female / voice-recording modulated)]
"Life is difficult now... It's too hard. If I don't get the support, that's too sad."

This Chinese immigrant, who asked to remain anonymous, says her family is struggling to make ends meet as the COVID-19 outbreak has driven the economy into a recession.

She has been living in Seoul for seven years but is not eligible to get help from the Seoul Metropolitan Government's emergency lifeline because she is not yet a naturalized Korean citizen.

Depending on income level and family size, the city said it will provide between 300-thousand to 500-thousand won, or roughly 250 to 410 U.S. dollars, in one-off subsidies to help local households ride out the downturn.

Mr. Udaya Rai, the head of the Migrants' Trade Union in Seoul, recently held a protest in front of City Hall calling for immigrant workers to receive the same payments as Korean citizens.

[Sound bite:  Udaya Rai - President, Migrants Trade Union in Seoul (Korean)]
“Seoul city last month decided to provide disaster support for the citizens of Seoul. But immigrants and immigrant workers are missing from that decision. They were excluded. So, we are calling for the same disaster relief payments for  migrant workers. There should be no discriminatory policies and policies must be fair. I am holding a one-person protest today to that aim.”
“Immigrants and migrant workers pay all the taxes the government requires. We pay earned income tax, aggregate income tax and residence tax. We pay taxes and other duties and it's because of discrimination we cannot receive the same money as members of society.”

Ironically, South Korean nationals from overseas can receive the lifeline support when they return to the country while tax-paying foreigners cannot.

A Seoul city official told KBS there are no legal grounds to provide the same financial support to expats who are residents of the capital.

Ansan, a city in Gyeonggi Province where many expats live, is providing aid of 70-thousand won to each foreign resident. The provincial government said it would provide each of the 109-thousand foreign nationals in the province who are either married to a South Korean citizen or have permanent residency 100-thousand won in basic disaster income amid the pandemic. However, there are said to be many more immigrants in the province who will not be able to benefit.

Most local governments in the country do not give the same financial assistance provided to Korean nationals to immigrants.
Kim Bum-soo, KBS World Radio News.
Share
Print
List