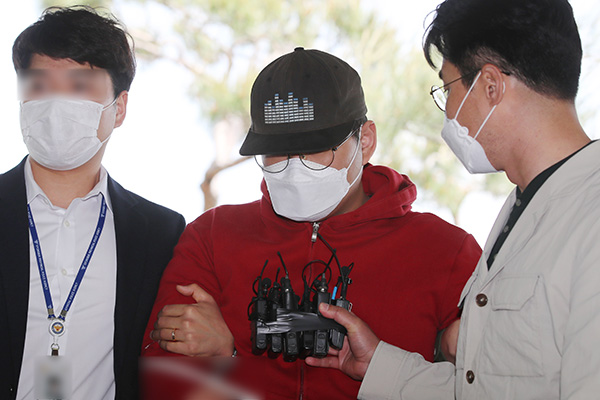 Police on Tuesday arrested a suspect who allegedly created the illegal Telegram chat rooms at the center of a high-profile online sex exploitation case.

Earlier in the day, the Andong branch of the Daegu District Court issued an arrest warrant for the suspect, known by his online nickname “God God,” citing the risk he might flee to avoid punishment.

The 24-year-old is accused of creating the first of what are now collectively called Nth Room chatrooms, and producing and distributing sexual abuse contents that feature women and minors.

Although he had been pursued by the North Gyeongsang Provincial Police Agency since July 2019, it was only until last Saturday that authorities were able to track him down and summon him for questioning.

During the probe, the suspect acknowledged that he was "God God," prompting an emergency arrest without a warrant. Police requested the warrant on Monday, charging him with violating the Act on the Protection of Children and Youth against Sex Offenses.

After attending a court review of the warrant on Tuesday morning, he admitted to the charges in a meeting with reporters and apologized to the victims.

Police plan to hold a review meeting as early as Wednesday to determine whether or not to reveal his identity.
Share
Print
List