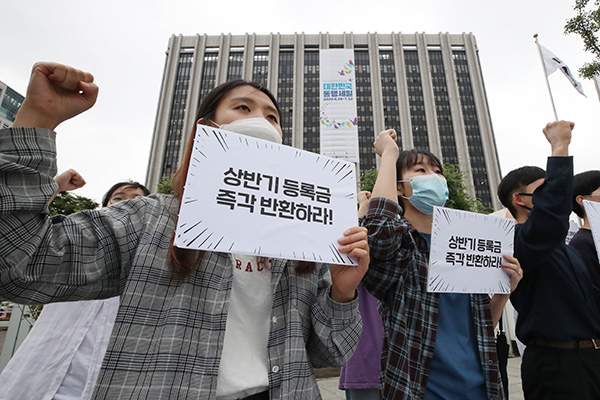 University students filed a class action lawsuit against the government and universities calling for tuition refunds, saying they were not provided a proper learning environment amid the COVID-19 outbreak.

Campaign Headquarters for Tuition Refunds, led by the National University Student Council Network, held a press conference on Wednesday and called for an instant refund of this year's first semester tuition.

The headquarters said the students went through either a full online semester or one that included only some in-person classes.

The student group pointed out that universities did not provide proper classes, school facilities or support for student activities that are mandatory according to universities' terms and conditions.

The headquarters added that the government is responsible for inadequate supervision of classes and lack of tuition refund measures.

Although the government increased the supplementary budget by 271-point-eight billion won to aid in tuition refunds, the group claimed that this is insufficient because it amounts to only 400-thousand won per student, roughly ten percent of a full semester’s tuition.
Share
Print
List