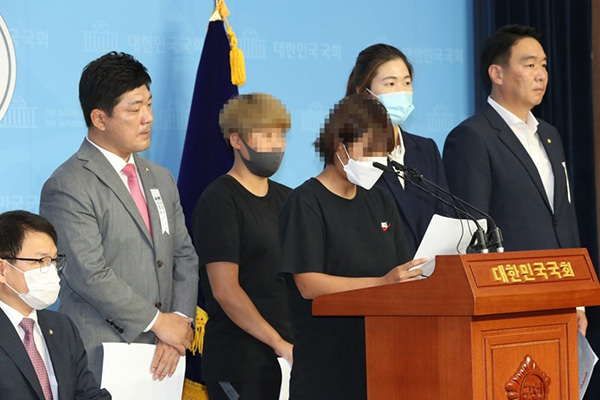 Anchor: In the latest development in the suicide of a triathlete following years of apparent abuse, her former teammates held a press conference on Monday claiming that physical and verbal harassment were rampant in their semi-pro club.
Sam Len reports.

Report: Former teammates of Choi Suk-hyeon, a triathlete who took her own life last month after allegedly being abused by coaching staff and teammates, supported her allegations, claiming they are also victims.

At a press conference on Monday, two triathletes, who competed with Choi in a semi-pro club at Gyeongju City Hall before leaving for other teams, said they were assaulted at least ten days a month.

[Sound bite: former teammate of late Choi Suk-hyeon (Korean/English translation)]
"Our triathlon team at Gyeongju City Hall was an empire for the coach and a select few athletes. Physical and verbal abuse were common occurrences."
"We got hit more than ten days out of a month, while we were competing in Gyeongju, while days when there was no abuse seemed awkward."

Between 2015 and 2019, the 22-year-old athlete was allegedly forced to overeat or fast, assaulted and pressured to pay sums of cash.

The former teammates corroborated such allegations.

[Sound bite: former teammate of late Choi Suk-hyeon (Korean/English translation)]
"In August of 2016, the coach bought 200-thousand-won worth of pastries and forced Suk-hyeon and I to eat them until the early hours of the morning. We eventually threw up, but had to keep eating them."

Choi filed a petition with the Korea Triathlon Federation and the Korean Sport and Olympic Committee(KSOC) in April of this year, asking that her alleged abusers be punished. But the organizations were apparently reluctant to take action.

Her ex-teammates also said the team's captain physically and verbally assaulted the athletes and alienated Choi, claiming she was mentally unstable.

The athlete recorded some of the terrible abuse she had to endure. The clip was filled with sounds of verbal abuse and what is deemed to be beating.

The former teammates also accused the team captain of checking their mobile chat conversations after they had gone to sleep.

The physiotherapist is accused of molesting the athletes while claiming he was treating them and threatening to drive Choi to suicide.

The coach held his own news conference on Monday, denying the allegations while the physiotherapist has broken off all contact with others.
Sam Len, KBS World Radio News.
Share
Print
List