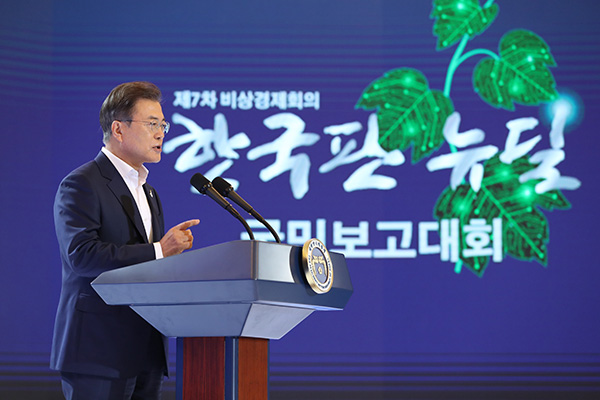 Anchor: The South Korean government on Tuesday revealed a detailed plan for its "Korean New Deal" initiative which aims to help the nation overcome the fallout from the COVID-19 pandemic and secure new growth engines in the post-coronavirus era. Our Bae Joo-yon has the details.

Report: President Moon Jae-in disclosed on Tuesday details of the Korean New Deal, which he described as a declaration to transition into a world-leading nation in the post-coronavirus era.

Saying the deal reflects the government’s strong determination to fundamentally change the nation, Moon noted that the initiative seeks to transform South Korea from a fast follower into a first mover.

The latest scheme is largely based on two initiatives: The Digital New Deal and The Green New Deal.

Finance Minister Hong Nam-ki said future generations will come to remember 2020 as the year that South Korea overcame COVID-19 with its so-called "K-quarantine" system and began a bold journey in the name of the Korean New Deal.

The latest scheme includes plans on digitalizing the nation’s social infrastructure and related management systems and fostering contactless industries. It also aims to supply some one million electric cars and 200-thousand hydrogen cars as part of efforts to move towards a low-carbon economy.

The latest details come after the government finalized the main outline of the Korean New Deal earlier on May seventh. The government came up with the scheme as it has become imperative for the nation to secure new growth engines with existing industrial structures suffering amid fears of a financial crisis resulting from COVID-19.

The details of the new deal also came as the Organization for Economic Cooperation and Development(OECD) projected minus one-point-two percent growth for South Korea this year, down three-point-two percentage points from its previous estimate in March.
Bae Joo-yon, KBS World Radio News.
Share
Print
List