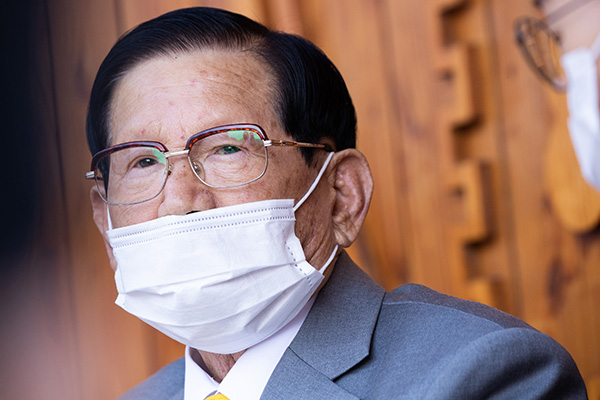 The leader of the Shincheonji Church of Jesus was questioned by prosecutors for four hours on Friday on charges that he deliberately gave false information to quarantine authorities earlier this year as they searched frantically for suspected COVID-19 carriers among his church members.

The Suwon District Prosecutors Office said Lee Man-hee, the founder of the minor religious sect, was summoned for questioning at 9:30 a.m. following a complaint filed over alleged obstruction of government efforts to contain the coronavirus.

The district prosecutors office said the questioning had to stop at around 1:30 p.m. after Lee complained of pain due to a chronic illness.

Lee is accused of inaccurately stating the number of worshipers and gathering places in reports filed with quarantine authorities back in February when COVID-19 cases were spiking among members of the Shincheonji church in Daegu.

He is also suspected of submitting false documents to health authorities and destroying evidence. In addition, he is accused of amassing real estate worth over ten billion won through illegal means and pocketing church offerings.

Earlier this month, three senior officials of the Shincheonji church were arrested on charges of obstruction of duty, violation of South Korea's Infectious Disease Prevention Act and for abetting the destruction of evidence.
Share
Print
List