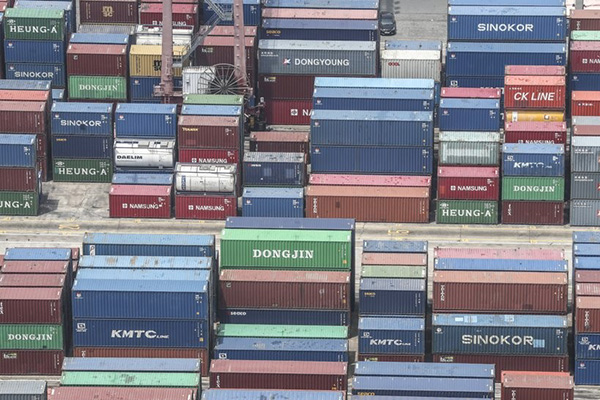 Anchor: South Korea's three major economic indicators all improved for the first time in six months. The increase in factory output, private consumption and corporate investments all appear to stem from a long-awaited recovery in exports, plus the government's massive stimulus packages to help the country weather the coronavirus pandemic.
Sam Len reports.

Report: Korea's factory output increased four-point-two percent in June compared to the previous month. It was the first time in six months that factory output shifted to growth and appears to be due to a recovery in exports.

Facilities investments, which indicate corporate confidence in market conditions down the road, also rose five-point-four percent in June after contracting the previous month.

The South Korean government said the positive figures "paint a clearer picture of an improvement" and have raised hopes for an economic rebound in the third quarter of this year, although uncertainties remain posed by the prolonged coronavirus pandemic and intensifying U.S.-China trade dispute.

In contrast, the economic performances of South Korea's key export destinations were hugely disappointing, mainly due to the impact of the coronavirus pandemic.

The U.S. economy shrank by nine-point-five percent on-year in the second quarter, which was the biggest drop since World War II.

Elsewhere around the world, Germany -- whose economy was considered to be rather successful in weathering the coronavirus pandemic -- declined ten-point-one percent compared to the first quarter, while Mexico's economy dropped by 17-point-three percent.
Sam Len, KBS World Radio News.
Share
Print
List