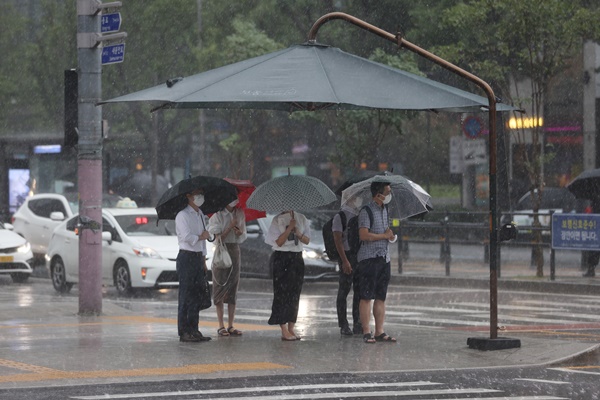 Heavy rain warnings were in effect in the central region and northern part of North Gyeongsang Province, with parts of northern Gangwon Province receiving 20 millimeters an hour.

With water vapor from the weakening Typhoon Hagupit powering the downpours, some areas in Seoul, Gyeonggi Province and the western part of Gangwon Province are expected to see 50 to 100 millimeters an hour accompanied by strong winds, lightning and thunder.

Southern parts of the country and eastern Gangwon Province are expected to get between 50 and 100 millimeters of rain, while Jeju Province and Ulleungdo and Dokdo islands will get between 30 and 80 millimeters.

Meanwhile, high temperature warnings have been issued in southern parts of the country, the southern part of the Chungcheong provinces and Jeju Province, where daytime temperatures are expected to hover around 33 degrees Celsius.
Share
Print
List