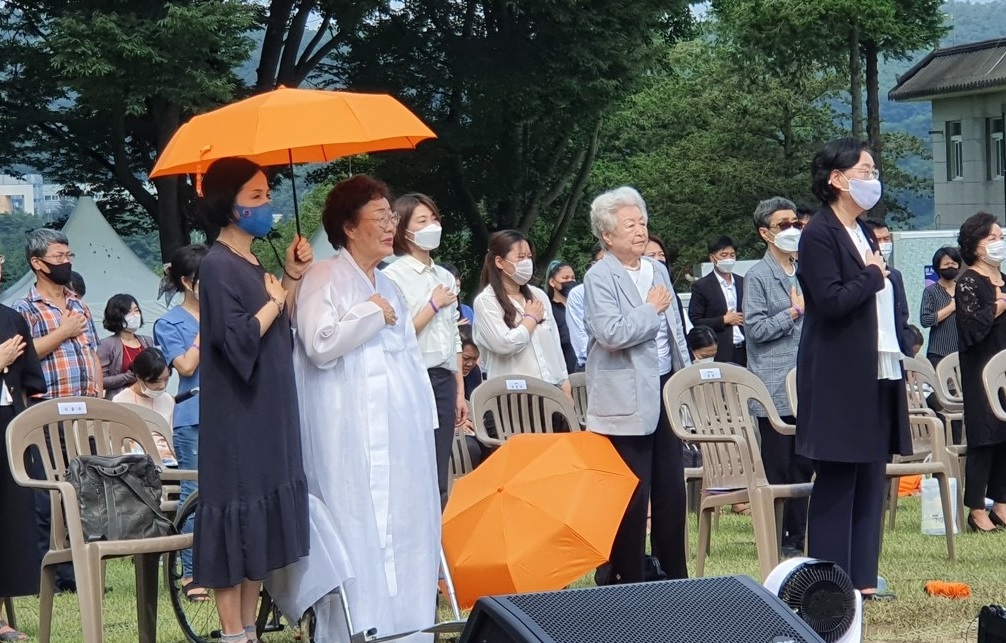 President Moon Jae-in says the wartime sex slavery issue will only have closure when the victims are content with the solution.

Moon on Friday addressed the thorny issue with Japan in a video message sent to an annual event commemorating the elderly victims.

[Sound bite: President Moon Jae-in (Korean/English translation)]
"Taking a victim-centered approach is the most important principle in resolving the issue. Until the grandmothers say it is alright, [the government] will seek a solution that the victims are content with. [We will] seek more surveys, research and education to straighten history so that more students and citizens can share the pain of the grandmothers and stand together with them in alliance."

The elderly victims are at the center of a bilateral dispute over Japan's  35-year-long colonial occupation of Korea, demanding Tokyo's official apology for their forced sexual enslavement.

[Sound bite: President Moon Jae-in (Korean/English translation)]
"I am concerned about the health of the grandmothers. [The government] will make sure that the surviving 17 elderly victims can have healthy and stable lives."

The Japanese government has consistently denied state involvement and the forced nature of wartime sex slavery.

Historians estimate up to 200-thousand women, mostly Koreans, were conscripted to serve as sex slaves for Japanese troops during World War Two.

The government on Friday also officially opened a digital archive at www.archive814.or.kr, providing access to more than 500 files of documents and materials attesting to Japan's wartime sex slavery.