S. Korea Proposes Revision to Joint Working Group on N. Korea with US 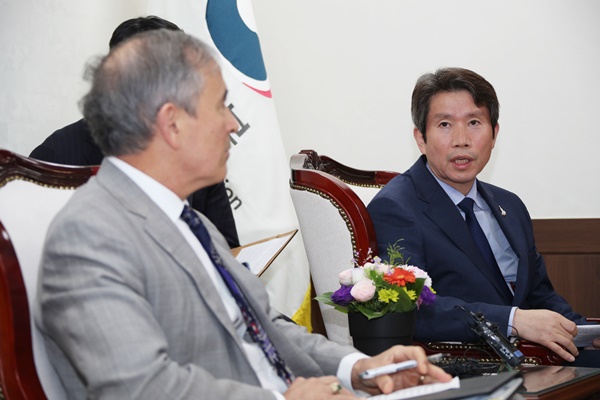 South Korea’s Unification Minister Lee In-young has proposed to the top U.S. diplomat in Seoul that the two allies revise how their policy coordination channel on North Korea operates and functions.

Lee made the proposal on the so-called South Korea-U.S. working group on Tuesday during a meeting with U.S. Ambassador to Seoul Harry Harris. It was his first encounter with Harris since the former ruling Democratic Party lawmaker was appointed to his post, which oversees Seoul’s policies vis-à-vis Pyongyang.

Lee said the working group should be readjusted and reorganized in a way that facilitates the development of inter-Korean relations and policies for peace on the Korean Peninsula.

He argued the move would ease concern that the apparatus is blocking the development of inter-Korean relations and expressed hope that he and Harris can work together to open the era of what he called “Working Group 2.0.”

The working group was created in November of 2018 to help Seoul and Washington coordinate on North Korea policies, including inter-Korean cooperation and international sanctions on the regime.

In response, Harris said the allies jointly pursue sustainable peace of the peninsula, change in relations with North Korea and complete denuclearization of the North.

While the U.S. diplomat reiterated Washington’s support for discussing related matters through the working group, he added he will listen to Lee’s opinion on the proposal.
Share
Print
List