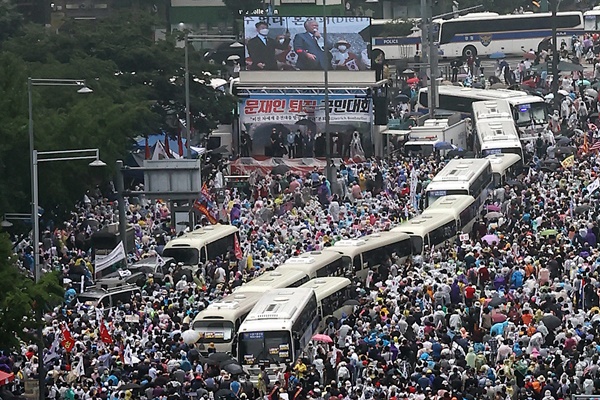 The National Police Agency on Friday reported its decision to take such measures during a meeting of the Central Disaster and Safety Countermeasures Headquarters.

The agency said in consideration of COVID-19 fears, it has issued no-assembly orders for 78 out of 291 outdoor rallies that have been registered with authorities for October 3 in downtown Seoul. The 78 subject to the ban have more than ten participants or are taking place within no-assembly zones.

Police will continue to persuade groups planning to host rallies to reconsider and to ban those that involve gatherings of more than ten people. The city’s ban on such gatherings has been in effect since August 21.

Health Ministry official Yoon Tae-ho noted that infection risks run high at large-scale rallies due to chanting, singing and close proximity among participants who travel from across the country.

He said the government will disperse such gatherings if they take place and strictly deal with any illegal acts.

There have been well over 500 cases of COVID-19 infections related to an anti-government rally held on August 15.
Share
Print
List