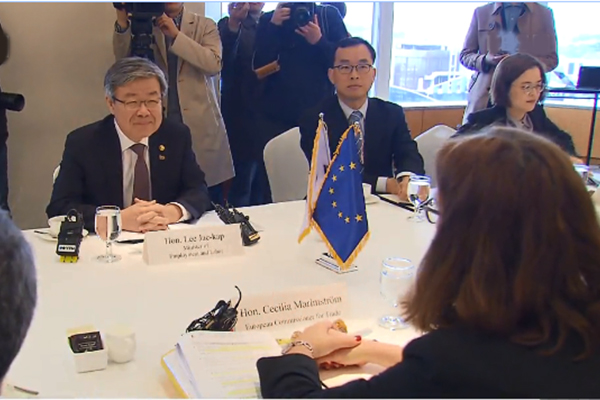 A panel of experts will be convened next month to determine whether Seoul violated its free trade agreement with the European Union by postponing approvals of key international conventions on workers’ rights.

The South Korean Ministry of Employment and Labor said on Tuesday that verbal reviews by an experts’ panel will be held via videoconferencing for two days from October 8 as part of the dispute settlement process on the trade and sustainable development chapter of the South Korea-EU FTA.

Initially, the two sides planned to hold a review session at the World Trade Organization’s headquarters in Switzerland in April, but it had been postponed due to the COVID-19 outbreak.

The panel comprising experts from South Korea, the EU and a third country will adopt a report carrying its conclusion on the matter within 45 days following the online review session.

South Korea has yet to ratify four out of the eight key International Labor Organization conventions since joining the organization in 1991.

The EU launched the dispute settlement process in December 2018, claiming Seoul's delay of ratification was a violation of their trade deal.
Share
Print
List