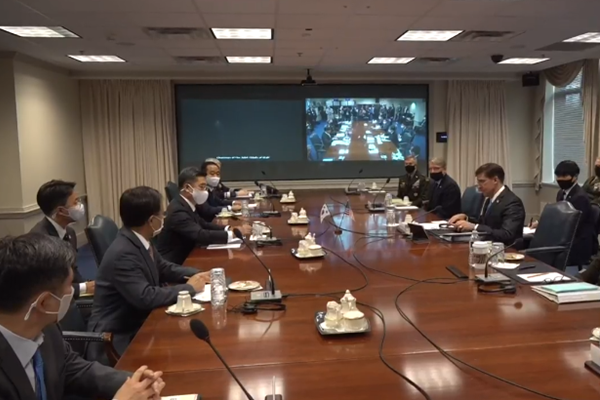 The defense chiefs of South Korea and the United States on Wednesday discussed pending security issues including the transfer of wartime operational control(OPCON) of South Korean troops from Washington to Seoul.

The statement said the defense chiefs noted great progress has been made toward meeting the conditions of the OPCON transfer through joint efforts and agreed to continue the efforts.

In the statement, Esper said if the two nations fail to swiftly reach agreement on the defense cost-sharing, the lack of the agreement may have a lasting influence on the allies' readiness posture.

The statement said the two sides concurred on the necessity of expeditiously resolving the defense cost sharing negotiations, in a fair, equitable, and mutually agreeable manner, particularly in light of the impact of the lapse on the South Korea-U.S. Alliance.

The two sides also held in-depth discussions on the military activities of North Korea and reaffirmed the need for close coordination and cooperation to realize the North's complete denuclearization and establish peace on the Korean Peninsula.
Share
Print
List