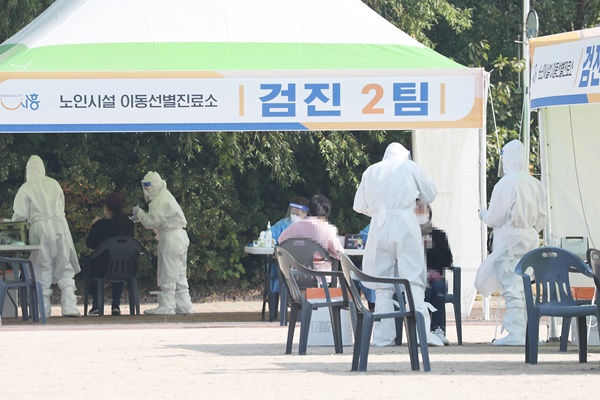 The daily COVID-19 increase in South Korea climbed back to triple digits amid an expansion of infection clusters linked to nursing homes and other medical facilities.

The Korea Disease Control and Prevention Agency(KDCA) said as of 12:00 a.m. Thursday, 121 additional people tested positive for the virus, raising the country's accumulated total to 25-thousand-543.

The daily increase surpassed 100 a week ago on October 15 when there were 110 new cases, and it is the second time since the government eased social distancing to Level One on October 12 that the number rose that high.

Eighty-two of the latest cases were in the Seoul metropolitan area, with 86 cases confirmed as of Wednesday afternoon in connection to a rehabilitation center in the Gyeonggi provincial city of Gwangju.

Some 68 cases were linked to a hospital in Seoul's Dobong district and another 81 cases to a geriatric hospital in Busan.
Share
Print
List