Main Opposition Criticizes Moon for Blaming Everything on COVID-19 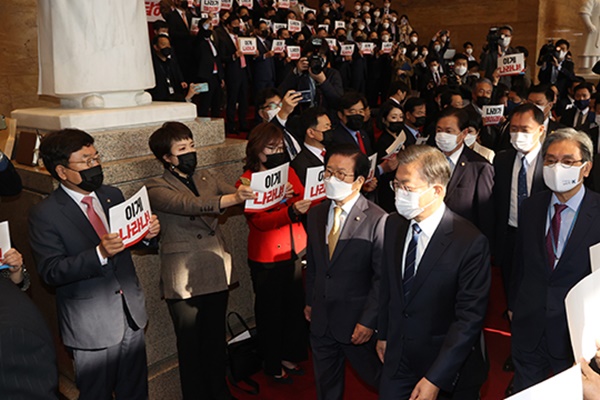 The main opposition People Power Party(PPP) criticized President Moon Jae-in for blaming the COVID-19 pandemic for all the difficulties in state affairs.

In a statement following Moon's parliamentary speech on next year's budget Wednesday, PPP spokesperson Yun Hee-suk said it was disappointing to see the president have a false understanding of reality and blame others for everything.

Another party spokesperson Choi Hyung-du said Moon's speech was filled with self-praise and declarations to move forward without cooperation from the opposition, stressing that a president is not a king, but a leader elected to office for five years.

Meanwhile, the chamber during Moon's speech was filled with sounds of applause from the ruling Democratic Party(DP), but protests from the PPP.

The main opposition strongly demanded an apology from the presidential office, after floor leader Joo Ho-young was searched by presidential security as he attempted to attend a meeting with Moon prior to his speech.

While Joo was unable to attend, PPP interim chief Kim Chong-in boycotted the meeting in protest of the DP's refusal to agree to a special counsel investigation into the ruling camp's alleged involvement in a hedge fund fraud case.
Share
Print
List