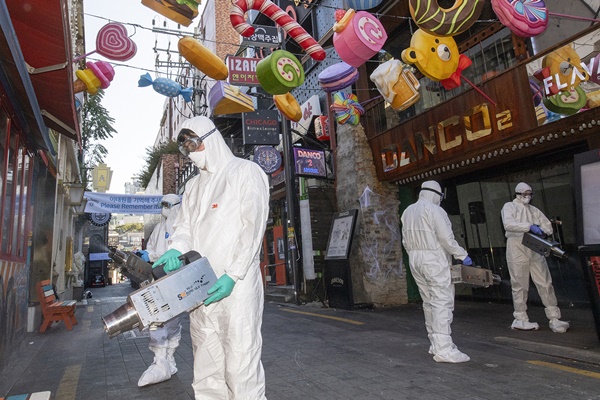 Anchor: With the daily COVID-19 increase in South Korea staying above 100, the government is tightening its quarantine inspection of clubs and bars ahead of Halloween this weekend. Prime Minister Chung Sye-kyun also asked the public to avoid mass gatherings.
Choi You Sun reports.

The daily increase remained in triple digits for the third straight day, as concerns are on the rise over a possible new wave stemming from club districts ahead of Halloween on Saturday.

While Seoul expects about half of the clubs in the city to shut down for Halloween, health authorities plan to inspect all types of "high-risk" facilities, including clubs and bars, for adherence to quarantine rules this weekend.

Health Ministry spokesperson Son Young-rae said on Friday that businesses found to have broken the rules on limited entry, operation time restrictions and distancing, will immediately face a forced shutdown and other administrative measures.

The Seoul Metropolitan Government will dispatch inspectors to entertainment establishments in the nightlife districts in Seoul's Gangnam and Itaewon areas.

At a meeting with officials, Prime Minister Chung Sye-kyun asked the public to avoid parties or events involving mass gatherings of people this weekend and to wear masks at all times.

Casting concerns over the possibility of the virus' resurgence, similar to a cluster that originated in the Itaewon club district in May, the prime minister called on ministries and local governments to mobilize all efforts toward quarantine.
Choi You Sun, KBS World Radio News.
Share
Print
List