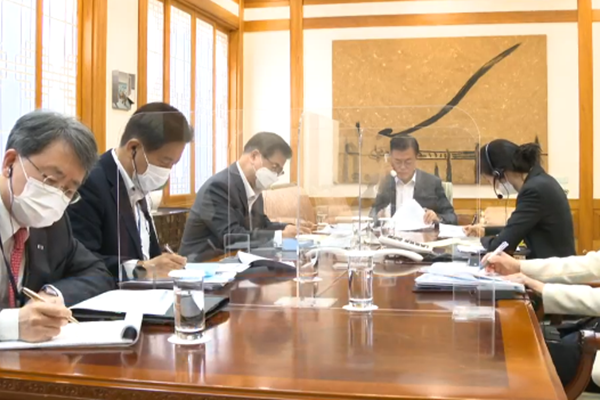 Anchor: President Moon Jae-in and U.S. President-elect Joe Biden spoke over the phone for the first time since Biden's election win was announced early Sunday. Reaffirming the allies' shared commitments toward strengthening the alliance and North Korea's denuclearization, the two agreed to meet for summit talks soon after Biden's inauguration in January.
Choi You Sun reports.

According to Moon's spokesperson Kang Min-seok, Moon referred to Biden’s visit earlier in the day to the Korean War Memorial in Philadelphia for Veterans Day where he paid tribute, in calling for further development in the alliance.

[Sound bite: Presidential Spokesperson Kang Min-seok (Korean/English translation)]
"President Moon expressed hope to closely communicate with the president-elect in the future-oriented development of the alliance that has defended the shared values of democracy and human rights for the past 70 years and been the basis for peace and prosperity on the Korean Peninsula, and to achieve denuclearization and lasting peace in the region."

The spokesperson said the president-elect, in response, reaffirmed Washington's commitments towards the alliance, as well as the denuclearization of North Korea.

[Sound bite: Presidential Spokesperson Kang Min-seok (Korean/English translation)]
"Emphasizing that South Korea is the linchpin for security and prosperity in the Indo-Pacific, Biden vowed to maintain U.S. defense commitments on the Korean Peninsula and to closely cooperate on resolving the North Korean nuclear issue."