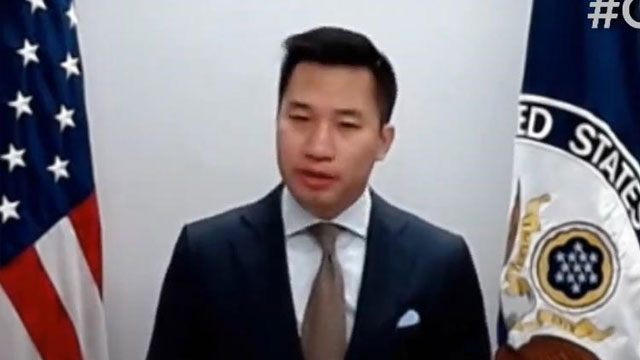 The U.S. State Department has launched a new website that will offer rewards of up to five million U.S. dollars for information on violations of sanctions on North Korea.

Alex Wong, deputy U.S. secretary of state for North Korea, unveiled the launch on Tuesday during his speech for a virtual seminar hosted by the Center for Strategic and International Studies.

Wong said that the department launched the website, DPRKrewards-dot-com, through which individuals across the globe can provide information to the U.S. rewards for justice program on North Korea sanctions evasion.

Announcing the launch, Wong accused China of "flagrant violation" of its obligation to enforce international sanctions on North Korea, saying that it is seeking to undo the UN sanctions regime aimed at convincing the North to abandon its nuclear program.

The U.S. official said at least 20-thousand North Korean workers still worked in China and that the U.S. observed 555 cases of North Korean shipments of coal or other sanctioned exports to China last year. He added that Chinese authorities did not act to stop these illicit imports on any occasion.
Share
Print
List