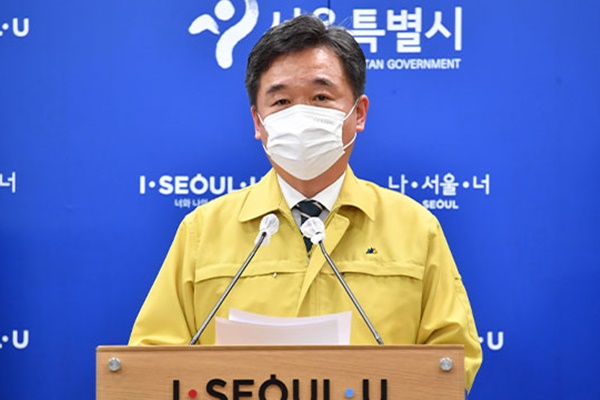 Report: The daily COVID-19 count in South Korea has surpassed 600 for the first time in nine months.

The Korea Disease Control and Prevention Agency(KDCA) said that 629 additional people tested positive for the virus as of 12:00 a.m. Friday, raising the country's cumulative total to 36-thousand-332.

Of the new cases, 600 were local transmissions and 29 were imported. The greater Seoul metro area accounted for 77 percent of all domestic cases, including 291 in Seoul, 155 in the surrounding Gyeonggi Province and 17 in Incheon.

Meanwhile, acting Seoul Mayor Seo Jeong-hyup said Friday that starting Saturday, the city has decided to turn its lights off past 9 p.m. for two weeks.

That means movie theaters, internet cafes, department stores and supermarkets must all close at 9 in the evening.

This is in addition to the current Level Two social distancing rules in the metro area, which bans entertainment establishments from opening, while restaurants, cafes and indoor sports venues must close by 9 p.m.

But mom and pop stores that are less than 300 square meters in area will be allowed to remain open for people to buy necessities, while restaurants can still offer delivery and takeout.

Museums, galleries, libraries, concert halls and gyms will be closed altogether regardless of hours, while public transport will also be cut back by 30 percent from 9 p.m. The reduction will apply to buses from Saturday and subway services from Tuesday.