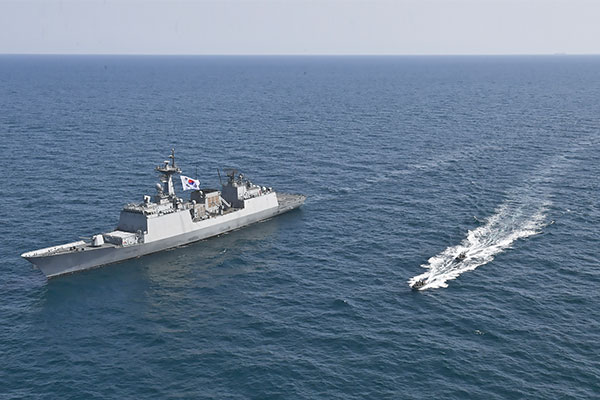 A naval destroyer operated by South Korea's anti-piracy Cheonghae Unit arrived near the Strait of Hormuz to help seek the release of a South Korean oil tanker seized by Iran's Revolutionary Guards Corps.

According to a South Korean government official on Tuesday, the 33rd contingent of the 300-strong Cheonghae Unit on the four-thousand-400-ton destroyer Choi Young began its duties in the region earlier in the day.

The Choi Young, which was conducting a mission in waters near Oman, was dispatched to the strait upon news of the MT Hankuk Chemi’s seizure.

The vessel is expected to respond to the situation in close cooperation with the ministries of foreign affairs and oceans and fisheries, as well as with Combined Maritime Forces(CMF), a multinational naval force headquartered in Bahrain.

On Monday, the Revolutionary Guard seized the MT Hankuk Chemi as it was traveling from Saudi Arabia to the United Arab Emirates, claiming that the vessel was causing environmental and chemical pollution in the area.