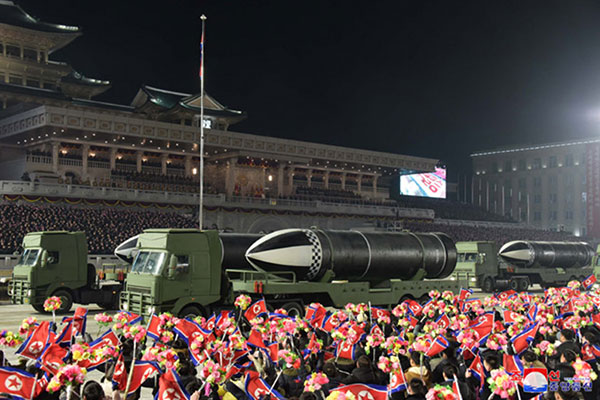 Anchor: North Korea held a military parade Thursday night after wrapping up a rare congress of the ruling Workers' Party. The reclusive state unveiled a new type of submarine-launched ballistic missile(SLBM) at the event, which was attended by leader Kim Jong-un.
Our Bae Joo-yon has more details.

The military parade took place two days after the North wrapped up its eight-day congress of the ruling Workers' Party on Tuesday.

It marks the first time the North staged a military parade in celebration of a party congress. The last military parade was held last October to mark the 75th founding anniversary of the party.

Compared to three months ago, the SLBMs appear to have a larger warhead. ​The missiles were labeled "Pukguksong-5ㅅ," indicating that they are possibly the upgraded version of the  "Pukguksong-4ㅅ" showcased in October.

North Korea also displayed what appeared to be an upgrade to its version of Russia's Iskander short-range ballistic missiles.

However, an intercontinental ballistic missile(ICBM) was not seen in the photos unlike in October.

Observers say the North could have aimed to pressure the incoming Joe Biden administration in Washington but was also moderating its provocation.

He was joined by North Korea’s No. 2 leader, Choe Ryong-hae, the president of the Presidium of the Supreme People's Assembly, and secretary of the Central Committee of the Workers' Party, Jo Yong-won, who was recently promoted to the nation’s No. 3 position.
Bae Joo-yon, KBS World Radio News.
Share
Print
List