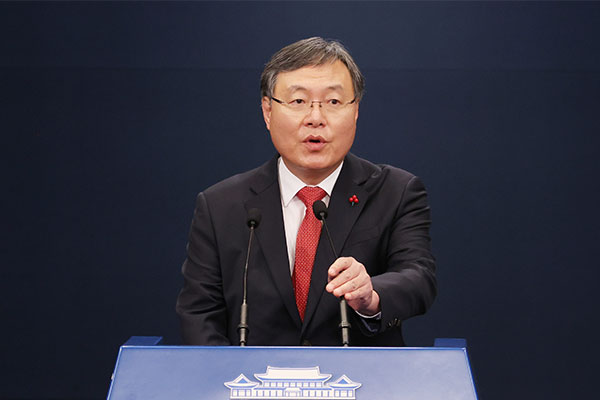 Shin Hyun-soo, the senior presidential civil affairs secretary who had resigned in protest of a recent shakeup at the prosecution, has confirmed he would stay on to fulfill his responsibilities.

At a teatime meeting hosted by President Moon Jae-in on Monday morning, Shin said he would entrust his fate to the president as he pledged to do his best in fulfilling his duties, according to Chung Man-ho, the senior presidential public communication secretary. It is not known how the president immediately responded.

Earlier this month, the justice minister had reshuffled several high-ranking prosecutorial posts, including retaining Lee Sung-yoon, the head of the Seoul Central District Prosecutors' Office, without thoroughly consulting with Shin.

This prompted Shin to tender his resignation to the president around the Lunar New Year holiday, but following Moon's dismissal of his resignation, Shin took two vacation days from last Thursday.
Share
Print
List