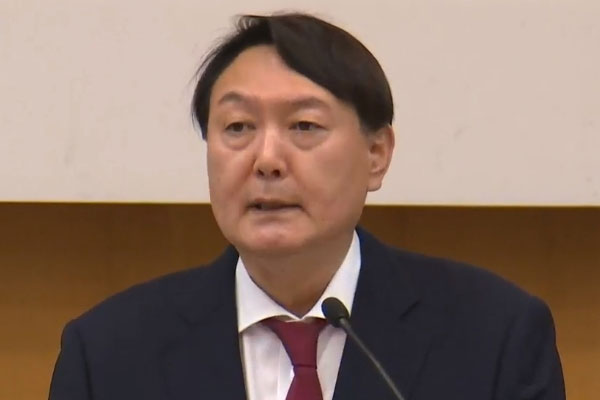 South Korea's top prosecutor lambasted the ruling camp's push to establish an agency that would handle serious crimes, saying completely stripping the prosecution of its investigative rights would be a backward step for democracy and the destruction of the constitutional spirit.

In an interview with the local daily Kookmin Ilbo on Tuesday, Prosecutor General Yoon Seok-youl said such a move would provide extraterritorial rights to those in power, adding that the relevant bill would not only sabotage the prosecution, but the nation's criminal justice system.

Yoon added that he is willing to risk his position 100 times if that would prevent the agency from forming.

The chief prosecutor expressed concern over an attempt to completely separate the rights to investigate and indict, stressing there must be sufficient verification to back claims that the prosecution hinders police investigations.

Yoon also criticized the ruling camp's plan to model the new agency after the United Kingdom's Serious Fraud Office(SFO), stating that the SFO was set up after coming to terms with limitations from having prosecutors only maintain indictments.
Share
Print
List