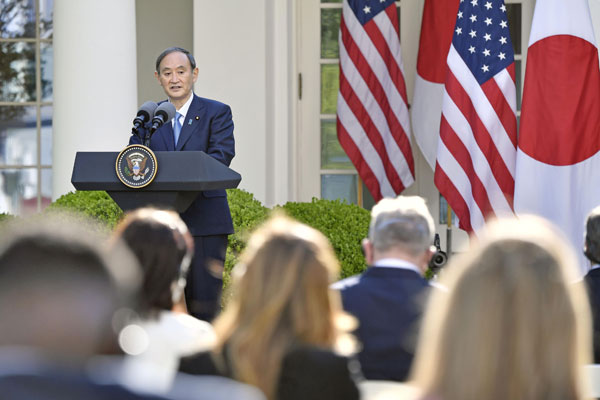 Japanese Prime Minister Yoshihide Suga has reiterated his willingness to meet with North Korean leader Kim Jong-un unconditionally to resolve the issue of Japanese nationals believed to have been abducted by Pyongyang decades ago.

Suga made the remark during a virtual seminar hosted by the Washington-based Center for Strategic and International Studies (CSIS) following his summit meeting with President Joe Biden at the White House on Friday.

In the webinar, the Japanese prime minister said he is prepared to meet the North Korean leader with no conditions attached to address the resolution of the abductees issue and establishment of productive bilateral relations.

Suga also pointed out that North Korea has carried out ballistic missile test launches around 80 times since 2013, calling it a violation of UN Security Council resolutions and a threat to peace and stability in the region.

He said CVID or the complete, verifiable and irreversible dismantlement of all of North Korea's weapons of mass destruction and ballistic missiles of all ranges, must be persistently pursued through close partnership with the U.S. and trilateral cooperation with South Korea.

But he also mentioned Beijing's attempts to make unilateral changes in the East China and South China Seas, and emphasized that he will make no concessions when it comes to sovereignty and universal values such as democracy, human rights and the rule of law.
Share
Print
List