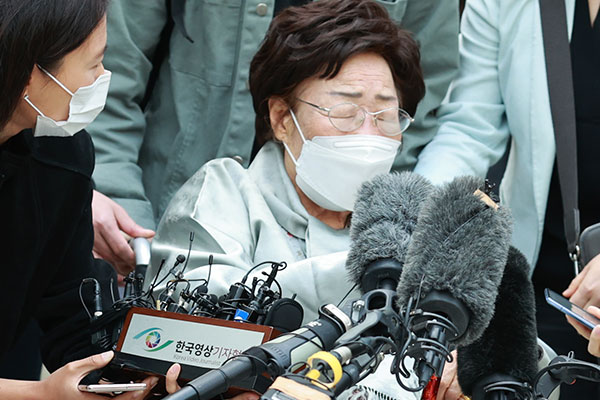 Anchor: A Seoul court on Wednesday dismissed a suit filed by 20 so-called “comfort women” and their families against Japan, citing sovereign immunity. Coming just three months after the same court had ordered Japan to compensate another group of 12 victims, the latest ruling is a setback in efforts to hold Tokyo accountable for war crimes.
Choi You Sun reports.

Report: The Seoul Central District Court on Wednesday dismissed a damages suit against Japan brought on by 20 Korean victims of Tokyo's wartime sexual slavery and their families in 2016, citing sovereign immunity.

Sovereign immunity is a legal doctrine that allows a country to be immune from civil suits in foreign courts.

Referring to similar cases against Germany following World War Two, as well as Seoul and Tokyo's 2015 agreement to settle the so-called "comfort women" issue, the court said an exemption would inevitably lead to diplomatic clashes.

The court, however, recognized that the South Korean government has failed to make sufficient efforts and progress in helping the victims overcome the pain and damage, and urged Seoul to continue seeking a diplomatic resolution.

The latest decision stands in stark contrast to a ruling by the same court in January, which had ordered Japan to make reparations of 100 million won each to the first group of 12 victims.

At the time, the court had ruled that sovereign immunity should not apply to "systematic crimes against humanity" and war crimes.

[Sound bite: Lee Yong-soo, Victim of Japan's Wartime Sexual Slavery (Korean/English translation)]
"It is very, very absurd. Very absurd. Regardless of the ruling, we are taking the case to the International Court of Justice. For certain. I have nothing else to say."

Lee Sang-hee, one of the legal counsels to the victims, called the ruling unacceptable and subject to an appeal.
Choi You Sun, KBS World Radio News.
Share
Print
List