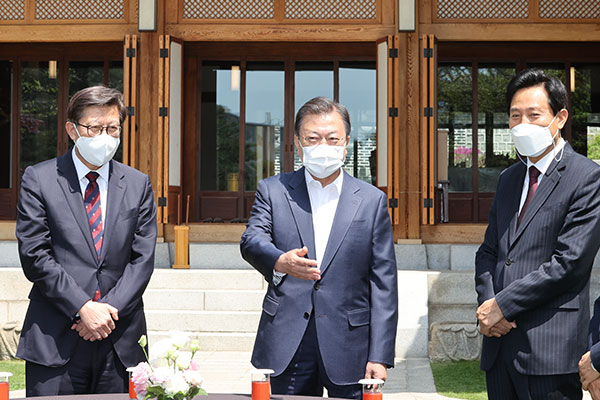 The presidential office said on Wednesday that Moon made the remark during a luncheon meeting with the mayors of Seoul and Busan when the latter brought up the idea.

In the meeting, Busan Mayor Park Heong-joon said it is heartbreaking to see the jailed former leaders and asked for President Moon to move toward unity, much like he had in inviting them that day to the top office.

In response, Moon said it is unfortunate the two former presidents are incarcerated with both being older and not in the best of health. According to a presidential official, he added that he must consider public consensus and whether the pardon contributes to national unity.

When reporters asked if that response could be viewed as a rejection of the proposal, the official said Moon's statement was likely neither consent nor refusal as he has exercised restraint in using his pardoning power.
Share
Print
List