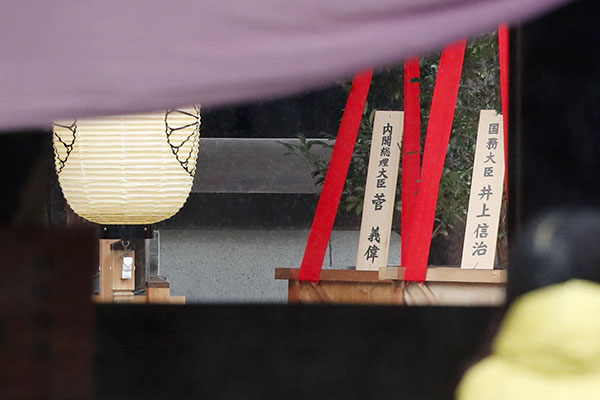 [Sound bite: Former Japanese Prime Minister Shinzo Abe (Japanese-English translation)]
"I came here to pray for the venerable spirits of those who sacrificed their precious lives to fight for (our) country."

The Tokyo shrine is holding a biannual festival to commemorate Japan's war dead.

Known for his revisionist view of wartime history, Abe had abstained from visiting the shrine while in office after a personal visit in 2013 sparked outrage from South Korea and China.

The South Korean Foreign Ministry issued a statement later in the day, expressing what it called “deep disappointment.”

[Sound bite: Foreign Ministry Spokesperson Choi Young-sam (Korean-English translation)]
"The ROK government urges the leaders of Japan to squarely face history, demonstrate through action their humble reflection and sincere remorse for Japan's past history, and keep in mind that these are the foundation for future-oriented development of South Korea-Japan relations."

Seoul and Tokyo have been mired in the worst confrontation in decades over Japan’s 35-year colonial occupation of the Korean Peninsula that only ended in the island nation’s defeat in World War Two.

The frayed relations were further worsened after Japan announced its plan to discharge a massive amount of treated but still radioactive water from a crippled nuclear power plant into the ocean.
Kim Bum-soo, KBS World Radio News.
Share
Print
List