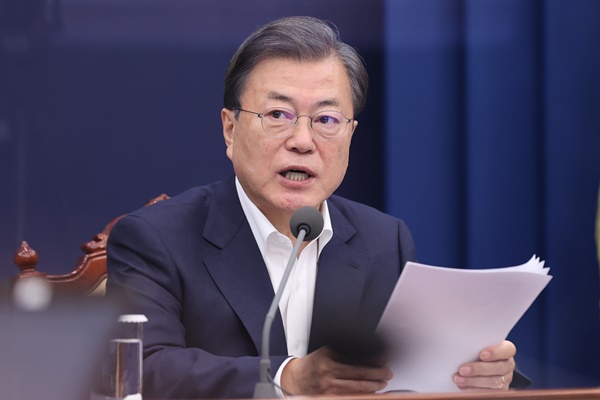 Anchor: President Moon Jae-in has ensured that the COVID-19 vaccination program is going well and better than expected. This comes amid rising concerns that South Korea may face a vaccine shortage after more than three million people have received their first doses.
Our Kim Soyon has more.

Report: President Moon Jae-in said Monday that COVID-19 vaccines have gone smoother than expected, and if the country continues the pace, the goal to vaccinate 12 million people in the first half could be raised to 13 million.

Chairing a special virus response meeting, the president said the government has already secured enough vaccines for twice the population and beat its goal to inoculate three million people by the end of April by 10 percent.

Although nearly three-point-four million people, or six-point-six percent of the population, have received their first COVID-19 vaccine shots as of Sunday, only 529-thousand doses of the Pfizer vaccine were left unused in the nation as of 12 a.m. as of Monday.

The shortage of vaccines comes as many of those who received their first Pfizer shots are scheduled to receive their second this month.

A considerable number of vaccine centers around the nation have reportedly limited new appointments or stopped them altogether for the first dose of Pfizer at the request of health authorities.

Regarding shortage concerns, Moon asked officials to step up efforts to ensure transparency and correct misinformation to prevent public jitters.

He said that in the month of May, the Pfizer vaccine will continue to be supplied by the week while a larger than previously anticipated volume of the AstraZeneca vaccine will arrive.

Moon asked the private sector and local authorities to maximize human resources in the vaccination program to achieve herd immunity earlier than November.

The president also called for domestic vaccine development, underlining the importance of vaccine sovereignty amid fierce global competition. He then encouraged the public to trust the government and cooperate in quarantine measures and the vaccination program.
Kim Soyon, KBS World Radio News
Share
Print
List