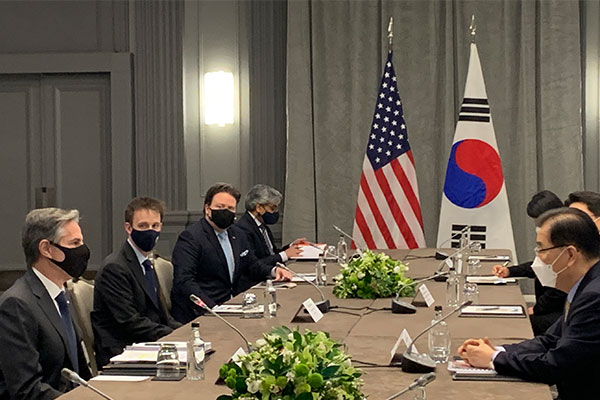 Anchor: With about two weeks before the South Korea-U.S. summit, Washington has shared with Seoul the results of its months-long review of its North Korea policy. U.S. Secretary of State Antony Blinken stressed that the new policy is focused on diplomacy and called on Pyongyang to seize the opportunity and engage.
Moon Gwang-lip has more.

Report: South Korean Foreign Minister Chung Eui-yong and U.S. Secretary of State Antony Blinken sat down together for the first time in less than two months ahead of the Group of Seven(G7) foreign and development ministers’ meeting in the U.K. this week.

During the talks in London on Monday, Blinken briefed Chung on the results of a long-awaited review of the U.S. policy on North Korea by the Joe Biden administration.

The details of the briefing are yet unknown, but, according to the Foreign Ministry, Chung welcomed that the conclusions of the review were decided in a realistic and practical manner, indicating Seoul’s satisfaction.

With his five-year term set to end in about a year, President Moon Jae-in has been seeking to rekindle the stalled peace process on the Korean Peninsula and hoping Biden would engage the North through diplomacy, not via strategic patience like previous U.S. administrations. Moon is expected to solidify his sales pitch for dialogue with Pyongyang during his first summit with Biden in Washington slated for May 21.

Blinken’s remarks also came after the North warned that the U.S. will face a "very grave situation" pointing to Biden’s recent policy speech to Congress, in which the U.S. leader called North Korea's nuclear program "a serious threat" along with Iran’s.

In a separate meeting with U.K. Foreign Secretary Dominic Raab, Blinken emphasized that the Biden administration’s North Korea policy is a byproduct of deliberations on past failures and efforts to have an effective policy on the denuclearization of the Korean Peninsula.

Noting the U.S. will watch the North’s words and actions in the coming days and months, the U.S. secretary hoped the country would take the opportunity to engage diplomatically and see if there are ways to move forward toward the complete denuclearization of the Korean Peninsula.
Moon Gwang-lip, KBS World Radio News.
Share
Print
List