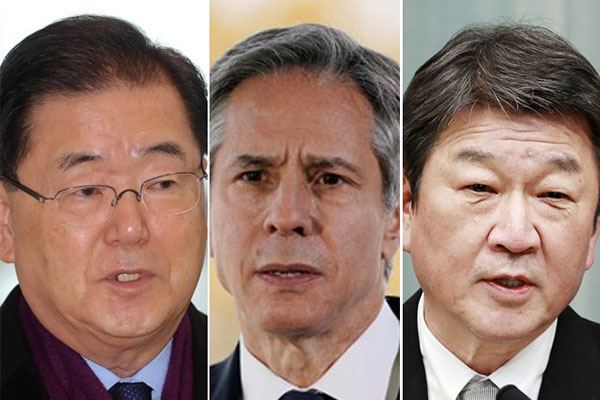 
Anchor: The top diplomats from South Korea, the U.S. and Japan held trilateral talks on the sidelines of a Group of Seven(G7) ministerial meeting in London, where they agreed to enhance coordination on the peace process involving North Korea. Seoul and Tokyo then held a separate bilateral meeting, where the ministers confirmed their differences on historical disputes and Japan's planned radioactive water release into the sea.
Choi You Sun reports.

The agreement between Chung, U.S. Secretary of State Antony Blinken and Japanese Foreign Minister Toshimitsu Motegi came on the sidelines of the Group of Seven(G7) Foreign and Development Ministers' Meeting in London.

Blinken outlined the new U.S. policy direction to his counterparts and the three sides decided to continue close consultations on its enforcement.

The South Korean Foreign Ministry said the nations decided to continue their trilateral cooperation to achieve complete denuclearization and the establishment of lasting peace on the Korean Peninsula.

The State Department said they agreed on the need for the United Nations member states to fully implement Security Council resolutions against the North for non-proliferation and to reinforce nuclear deterrence.

Motegi reiterated Tokyo's position on South Korean court rulings on Japan's wartime forced labor and sex slavery. He stressed that they violate international laws since compensation was settled through bilateral agreements in 1965 and 2015.

Chung emphasized that historical disputes can't be resolved unless Japan owns up to accurate accounts of its past.

He also delivered Seoul's opposition to Tokyo's planned release of radioactive water from the Fukushima nuclear plant into the ocean, citing environmental concerns. Motegi, in response, expressed concerns over such criticism from Seoul.

Despite confirming their differences, Seoul and Tokyo agreed on the need to jointly seek ways to develop future-oriented relations for peace and prosperity in Northeast Asia and around the world.
Choi You Sun, KBS World Radio News.
Share
Print
List