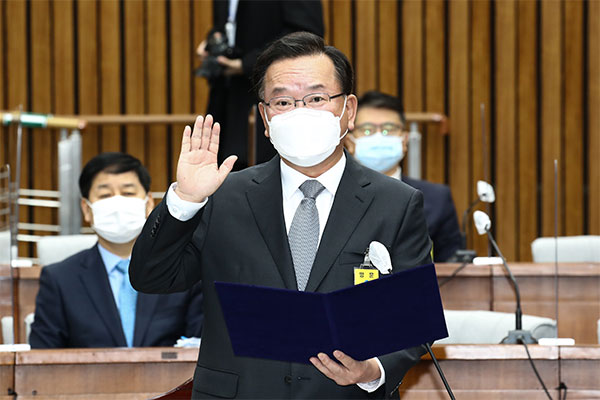 Anchor: A confirmation hearing is under way for Prime Minister nominee Kim Boo-kyum on this Thursday. The nominee on the first day of the question-and-answer session pledged "no more disappointment" in the government's housing policies, seeking to win back the hearts of the public who withdrew their support from the ruling camp in last month's by-elections.
Kim Bum-soo has more.

Report: Opposition lawmakers scrutinized President Moon Jae-in’s choice for his last prime minister, pressing him to explain how he is going to fix the failed policies of the government from the last four years.

At his confirmation hearing on Thursday, nominee Kim Boo-kyum pledged to contain skyrocketing housing prices, a key factor that led to the ruling party’s defeat in last month’s mayoral by-elections.

[Sound bite: Prime Minister nominee Kim Boo-kyum (Korean-English translation)]
“I do understand that the public has been greatly disappointed by the real estate policies and the [unethical] conduct of public officials. I promise to no longer let down the public. I will enforce to the letter rigorous anti-speculation measures that stemmed from the LH controversy in March. While maintaining the housing price stabilization policies, I will make sure that there will be no problem for [non-speculative] actual home buyers in purchasing properties.”

Noting that he believes more benefits should be given to those who spent about a year and a half in mandatory military service, the nominee also appealed to young male voters, deemed to have withdrawn their support for the ruling camp during the by-elections.

[Sound bite: Prime Minister Nominee Kim Boo-kyum (Korean-English translation)]
"[It is important that] the government recognizes those who spent part of their lives for the country and provides at least minimum benefits for that, as public corporations translate the service period calculating their previous career. While some private companies do the same, I will seek ways to expand such measures."

Widely regarded as a conciliator in the regionally divided Korean politics, the nominee served as the Moon administration’s interior minister during his fourth legislative term in office.

Lawmakers are also pressing the nominee to shed light on allegations that his daughter and son-in-law enjoyed unfair terms in holding an investment account, which the controversial Lime Asset Management is suspected to have offered to them in a possible lobbying attempt.

Kim said his daughter was only a victim to the Ponzi scheme by the now-defunct hedge fund.

President Moon’s nomination of Kim as well as five other Cabinet ministers for land, industry, science, oceans and labor came after voters chose main opposition People Power Party candidates for the mayors of Seoul and the nation’s second largest city of Busan.

But it is uncertain if the reshuffle will be able to support Moon's falling approval ratings until his term ends next May.