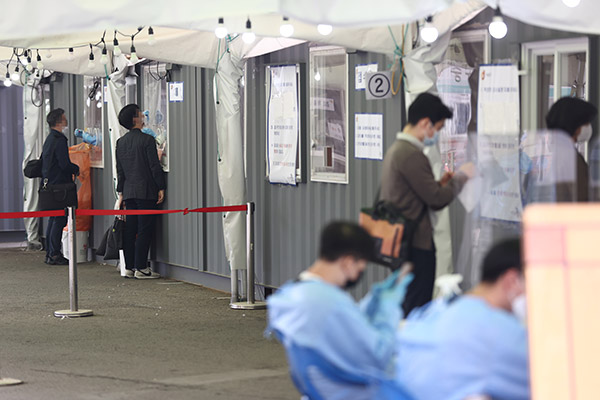 Anchor: New COVID-19 cases in South Korea have remained in the 500s for a second day, as cluster infections remain in the country. However, authorities say that new cases have been gradually declining since hitting a peak in mid-April.
Choi You Sun reports.

Nine more people succumbed to the virus, bringing the death toll to one-thousand-860.

Out of the 525 new cases, 509 were local infections with 325, or 64 percent, of which were reported in the Seoul metropolitan area.

Yoon Tae-ho, a senior Health Ministry official, said new cases have been declining over the past two to three weeks since hitting a peak in mid-April.

As for acting Prime Minister Hong Nam-ki's assessment that the epidemic is slowing down, Yoon said daily cases could fall below 500 within the next week or two if the virus' reproduction rate remains under one with no variables.

The official, however, said the situation should be further monitored as cases may have only slightly fallen due to the Children's Day holiday on Wednesday. The government is expected to soon decide whether to extend the current special quarantine period in place through this week.

New guidelines on allowing visitations at nursing homes will also be announced this month, as the second round of vaccinations for seniors are set to begin after May 14.
Choi You Sun, KBS World Radio News.
Share
Print
List