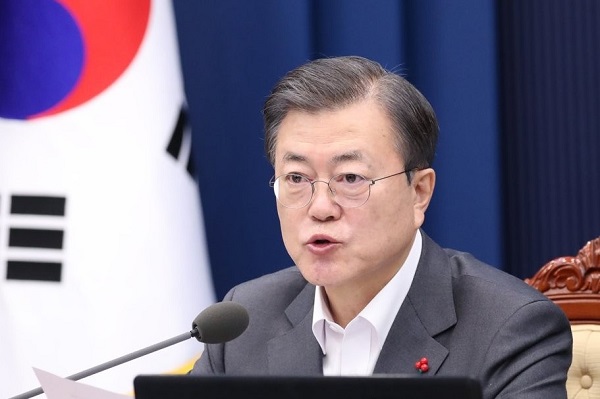 President Moon Jae-in says the war against COVID-19 is nearing an end, citing that the country is moving toward achieving herd immunity through accelerated vaccinations.

Moon made the remarks on Monday as he addressed the nation while marking the fourth anniversary of his presidency, asking the public to endure a little longer.

The president said even if herd immunity comes short of eradicating the virus, it will help restore normalcy in the country by making COVID-19 more manageable.

He then said a fast economic recovery will lead to an improvement in the people's livelihoods, as the president pledged efforts toward restoring jobs and addressing socioeconomic gaps and inequality.

As for criticism over vaccine supply, Moon conceded that there was a sense of "what-if" had vaccinations moved faster. He added that the country's reality was that it did not possess vaccine sovereignty nor was it able to secure a large volume from overseas ahead of time.

The president then pledged to complete the first round of vaccinations for all those eligible by late September, in order to achieve herd immunity earlier than the previously targeted November.